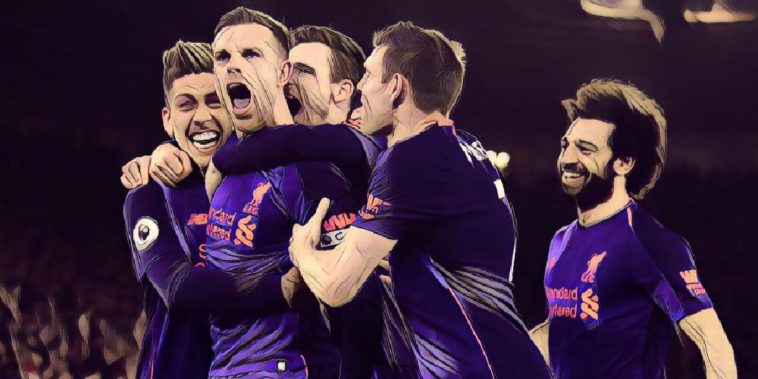 The 28-year-old has often been used in a holding midfield role by Liverpool boss Jurgen Klopp, but has thrived in recent weeks having been utilised further forward.

The England international says he is happy to play either role for club and country, but admits he is enjoys being given a licence to get forward.

“I can do both positions and [Klopp] sees I can do both, it’s basically what he wants and needs,” Henderson told reporters after their 2-0 win over Porto

“I felt more comfortable and natural in that position for England, creating chances further up and doing what I enjoy doing. At the same time when I played No 6, I felt I’ve learned that position really well and if I need to play there I can do a job there.

“I played there for a long time. I was sort of a box-to-box midfielder when the manager first came, but again I just feel as though it’s another position I can play. I want to keep contributing to the team.

“When I play the deeper position my role changes and I try to do different things and I can’t affect it as much in the final third. But [against Porto] and in the last game when I play in that position I feel as though I can make a difference going forward as well.”

Henderson credited Liverpool’s signing of Fabinho as a major factor in his ability to get forward, the Brazilian arrived from Monaco in a £40m deal last summer and has impressive in a defensive midfield role.

“For me as a captain and as a player at this football club, I always put the team first. I do whatever the manager tells us to do really.

“But when we had the conversation I felt that I could speak my mind. I felt I could play further forward in that role.

“In the last couple of years there hasn’t really been a player like Fabinho in that role so I’ve had to adapt. I think I’ve done quite well. I think if you look at Fab, it’s quite natural to him, that’s his position and he’s so good at what you need to do in that position.

“I just thought that might give me a bit more licence to get forward more at times but you never know. The manager wants me in both positions which is good for me and for the team.

“It’s another string to my bow that I can play both. I’m enjoying just playing and trying to contribute higher up the pitch in the final third. Thankfully I managed to do that (on Tuesday).“