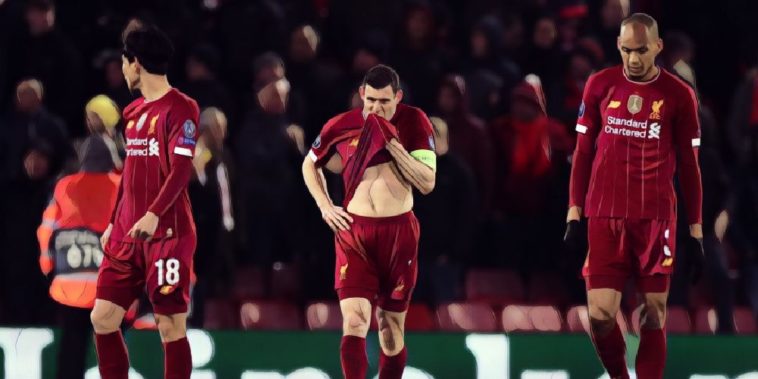 Jordan Henderson says Liverpool ‘deserved to go through’ after the club’s defence of the Champions League ended in a 3-2 extra-time defeat to Atletico Madrid at Anfield.

The holders headed into the second leg on Merseyside needing to overturn a 1-0 deficit from their first encounter with Diego Simeone’s side three weeks ago, and looked to have done enough to book their place in the quarter-finals after Roberto Firmino scored early in extra-time to put the Reds 2-1 ahead on aggregate.

Georginio Wijnaldum had earlier forced the added 30 minutes with a fine header as Liverpool lay siege to the Atletico goal, only for the tie to turn in the visitor’s favour courtesy of a calamitous mistake from goalkeeper Adrian.

The Spaniard – deputising for the injured Alisson – gifted possession away with a dreadful clearance before being beaten by substitute Marcos Llorente as he desperately back-peddled towards his goal.

Llorente would score a second on the counter-attack as the hosts poured forward to all but end Liverpool’s defence of their crown, before Alvaro Morata added further insult to injury late on following another Atleti breakaway.

Defeat was harsh on Liverpool who dominated much of the contest, and Henderson believes his side did enough in their performance to progress to the last eight.

“I thought overall our performance was good, our intensity was good as we spoke about before the game,” Henderson told BT Sport. “We put everything into that game so we are bitterly disappointed especially with the goals we conceded. We were largely pleased with our performance tonight but those goals were disappointing.

“We’ve experienced situations like this over the last few years and we know how important it is to stay focused right until the end, that lapse in concentration can really cost you. We deserved to go through based on the whole performance, so we are obviously very disappointed.

“All we can focus on is our performance level, and to have conceded those goals isn’t like us. We’re disappointed but we’ll take it on the chin.”

The visitors defensive resilience was once again evident as Atletico survived wave after wave of red attack, however, the tie was largely decided on the performance of the two goalkeepers, Jan Oblak proving a formidable obstacle as Adrian struggled in the home goal.

Henderson praised the Slovenian international for his star showing, before urging his side to regroup ahead of a huge Merseyside derby clash against Everton on Monday night.

“Jan Oblak had a great game, and we did create so many chances – we just couldn’t find the net, we couldn’t find that third goal to kill the game off. We left everything on the field and that’s what is important.

1 – This was the first time Liverpool have failed to progress from a two-legged tie in European competition (inc. qualifiers) under Jurgen Klopp, having previously been successful in each of the previous 10. Shocked. pic.twitter.com/XrvU3cQtm1

“It’s hard to play against a team that defends very well and that is how they play. But we created a lot of chances, its not like we didn’t create them. Overall we’re so disappointed and for the rest of today and tomorrow it won’t feel nice, but we have to use it to help us finish the season strong.

“Our focus is now on the derby, that’s up next. It’s a big game, and we’ll just take it game by game to ensure we can finish this season strongly.”

Read – One of those nights: Five of Liverpool’s greatest European comebacks at Anfield