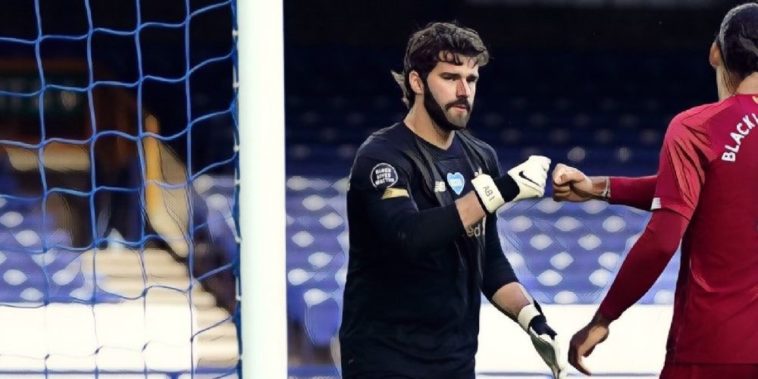 Jordan Henderson has praised Liverpool’s Alisson as ‘outstanding’ following the goalkeeper’s decisive derby save against Everton.

The Premier League leaders returned to action with a goalless stalemate against Everton at Goodison Park, with the Reds edging ever closer to a first league title in three decades.

Jurgen Klopp’s side lacked their usual attacking impetus in the absence of both Mohamed Salah and Andy Robertson, and Henderson admits his side can ‘be a lot better’ ahead of a defining run-in.

“I think we can be a lot better of course,” Henderson told Liverpoolfc.com. “We know that [but] there were still some positive things that I thought were good.

“We tried to adapt to the situation but overall obviously we are disappointed because we wanted to come here and get the three points. But there are still plenty of positives, a clean sheet and I thought we defended really well. We just lacked that bit in the final third.”

The Liverpool skipper also reserved special praise for the performance of goalkeeper Alisson, who made a brilliant late save to deny Everton’s Tom Davies and secure a valuable point for the Reds.

“He has been outstanding all season and he’s come up with a brilliant save as well to keep us with a clean sheet, so that was important for us,” he said of the ‘keeper. “But, overall there’s still a lot of positives.

“Like I said, in the final third I think we can be a little bit better and more clinical but we’ll get ready now for Wednesday.”

Liverpool boss Jurgen Klopp also praised the Brazilain, though urged his side not to ‘take him for granted’

“It says a lot about him,” he told his post-match press conference. “We should not take him for granted. Absolutely outstanding.

“That’s what a world-class goalie is, nothing to do for 90 mins pretty much, then he’s there.”