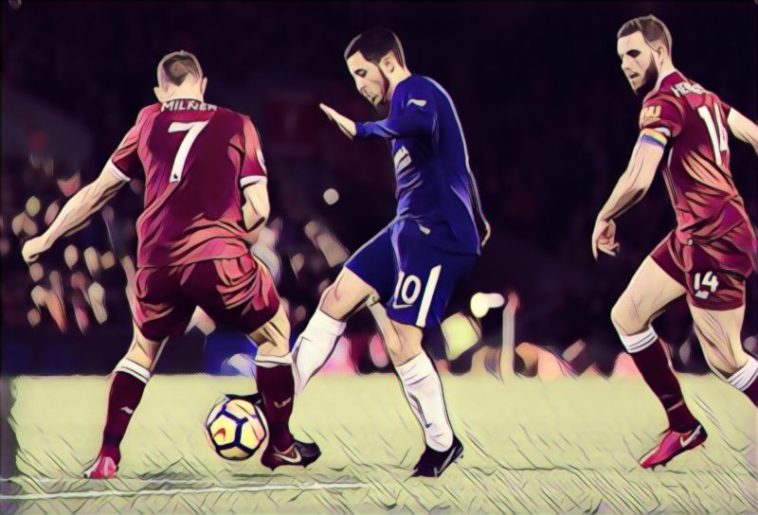 Chelsea star Eden Hazard revealed in a interview with the Evening Standard that he was left badly isolated by Antonio Conte’s tactics during his sides 1-1 draw against Liverpool at Anfield on Saturday, and that he sometimes takes it easy in training in order to recover from the heavy treatment he receives from opposition defenders during games.

The 26-year-old admitted that himself and Alvaro Morata , who have formed a superb partnership recently, where left badly isolated during this weekends clash against Jurgen Klopp’s side.

Both players did their best to create scoring opportunities for their side, but they obviously missed having the creative genius of Cesc Fabregas in the team with the more defensive minded Danny Drinkwater selected for this match.

“We changed the system, Danny Drinkwater was on the pitch and then we were a bit more defensive.

“The only player around me was Alvaro Morata, so if we wanted to win we had to do something together, just me and him.

“That’s why I tried to pass my opponent every time, and in the first half we did well. In the second half it was more complicated but we scored so I am happy.”

Hazard had looked like the game’s best player in the first-half, although he faded somewhat in the second period after taking a heavy blow to the back of his calf from former team-mate Mo Salah. The talented Belgian international also revealed that he has taken to using training sessions as down time to recover from the numerous knocks he picks up during games.

“Do I protect my legs in training? Yes, yes, yes! To be fair, in training I don’t give everything.

“When we have drills, some people go crazy, but I don’t want to be kicked in training. I try to have a break.

“We don’t have many breaks in the season, so I try in training to have more of a rest, and then in the games I give everything.

“When I’m on the pitch I do receive kicks, but that is part of football and I’m not complaining.”

Hazard certainly has a point as since his arrival in the Premier League in 2012, he has been the most fouled player in England’s top-flight.

Chelsea’s draw at Anfield means they are now 11 points behind league leaders Manchester City, so their best chance of Silverware will come either in the EFL Cup, FA Cup or Champions League, and to increase their chances of success in any of these competitions keeping Hazard fresh and fit is a neccessity.