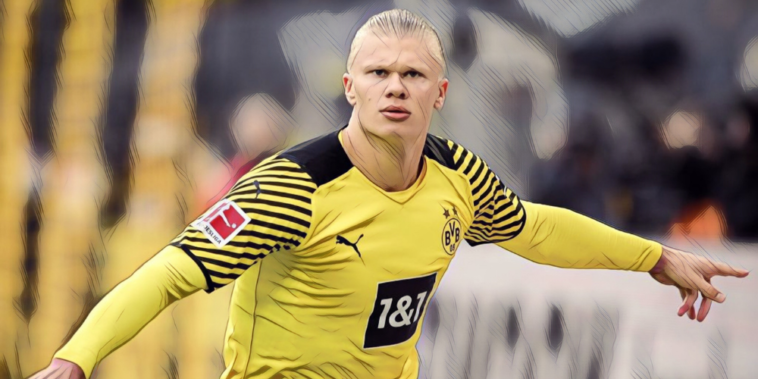 Erling Haaland has revealed that Borussia Dortmund are pressuring him into making a decision on his future.

The Norwegian is set to be the hottest property in world football this summer, the striker’s contract at the Westfalenstadion possessing a €75million release clause that is set to attract virtually all of Europe’s biggest clubs.

Dortmund are understandably keen to keep the prolific goal machine, his brace against Freiburg on Friday night taking his tally to 78 goals in 77 appearances since joining the Bundesliga side.

Recent reports have said that Dortmund are looking to come to a resolution about his future in the coming weeks, and speaking after the 5-1 win, the 21-year-old said he is being pressured to come to decision as to whether he will stay or go.

“The last six months, I have chosen not to say anything out of respect for Dortmund,” Haaland told Viaplay.

“But now the club has started to pressure me into making a decision, but all I want to do is to play football.

“I have said from the beginning that I want to focus on football, because that is when I am at my best, not when other things come into my mind.

“Now they have put pressure for a while. So it is time to get things started. All I want to do is to play football, but I can’t do that now.”

It has been claimed that Haaland’s preference is a move to Real Madrid, though Manchester City supreme finances could blow other suitors out of the water, with Haaland’s agent, Mino Raiola, and his father, Alf-Inge Haaland, also set for a significant payment as part of a potential transfer.

Opinion – FFP: It feels unfair that Newcastle must be sensible and shrewd while living out a dream