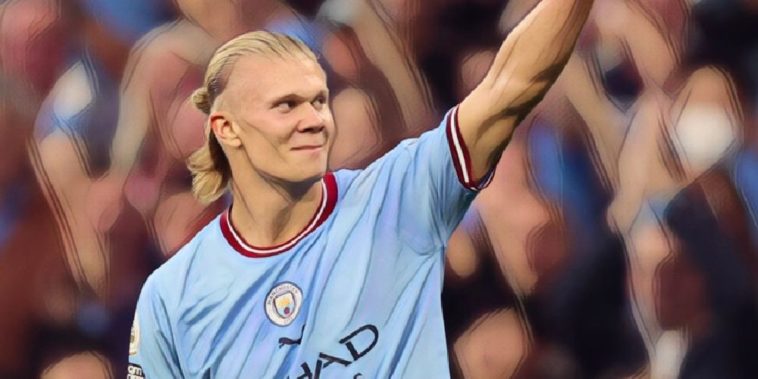 Manchester City came into the game as one of only three unbeaten sides in the Premier League, while Nottingham Forest have endured a mixed start to their return to the top flight, slipping to a 2-0 loss to Spurs last time out.

It was Manchester City who started the game with their trademark dominance and quickly took advantage of that domination after just 12 minutes. Fresh off the back of netting a second-half hat-trick to help his side to a 4-2 win over Crystal Palace, Erling Haaland added another to his already impressive goalscoring tally, showcasing his strength to get in front of his man and get on the end of a Phil Foden delivery to divert the ball past Dean Henderson.

The Norwegian goal machine added another just 10 minutes later after a poor pass out from Henderson was ruthlessly punished by the Champions, with Haaland eventually poking home from close range after Foden unselfishly squared the ball inside the area.

Ridiculously – yet perhaps not even surprisingly – the 22-year-old completed his second hat-trick in successive halves as he made it 3-0 after just 38 minutes. Foden’s delivery was headed back across goal by John Stones, with the prolific striker again displaying his predatory instincts to nod home.

Five minutes after the break and City made it four, with Joao Cancelo rifling home an absolute thunderbolt into the top corner from all of 25-yards.

With all the headlines surrounding Erling Haaland, it’s easy to forget that Man City have also added Julian Alvarez to their ranks, and the Argentine bagged his first Premier League goal in the 65th minute, lashing it underneath Dean Henderson following some good work by Riyad Mahrez.

Alvarez then netted his second and City’s sixth with three minutes to play, rifling home from the edge of the area after Riyad Mahrez’s shot had been blocked.

Speaking after the game, hat-trick hero Haaland said his goalscoring ability was down to the quality of his teammates.

“Amazing, nothing more to say,” he told BT Sport.

“It was about keeping doing what we did in second half against Palace, play, play, play – we knew there was going to be chances. It was nice.

“It’s been good so far, I’m not complaining [about the physical element of the Premier League].

“I try to listen as much as I can to Pep [Guardiola] and to play with the boys because they are amazing footballers, and without them I would not be able to score goals. It’s about finding chemistry. It’s about playing together and listen to Pep. It’s fantastic, it’s why I came here. It’s going to be nice.

“There’s going to be a lot of games, so it’s important to keep going and enjoy as much as we can.”

Hat-trick for Erling Haaland, Pep Guardiola's side are on another level. pic.twitter.com/FY7w4UoR1m

Meanwhile, after his brace, Julian Alvarez opened up on his adaptation following his move from River Plate.

“Obviously I’m very happy for the team performance, and for my two goals, and getting that reception from all the fans,” he said.

“I think it’s not me or Erling, we can play together in the starting XI. We fit together, which is good for the team.

“Some things are similar from Argentina, like the ball pressing, but the Premier League is faster, I have to adapt to that. My team-mates help me and I am super grateful for that.”

Haaland is becoming the next rated GOAT. Two hat tricks in two matches what a start.