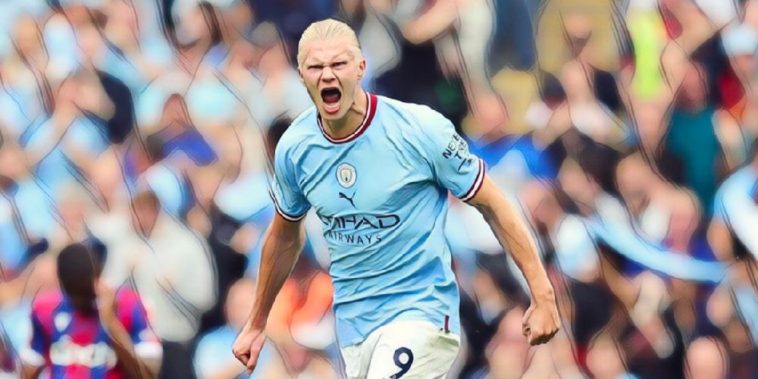 Erling Haaland announced his arrival to the Etihad last weekend, with the forward scoring his first goals at home for Manchester City.

The 22-year-old has now scored six goals in his first four league games for City, matching the total Sergio Aguero managed during his own explosive start in English football.

His treble at the weekend was also remarkably his 13th in senior football to date and we’ve decided to break down Haaland’s hat-tricks in his career so far.

Having began his career with hometown club Bryne, Haaland moved to Molde as a teenager where he featured under the management of Ole Gunnar Solskjaer.

Having scored on his debut for the Norwegian side, he reached new levels the following season with 16 goals in all competitions in 2018.

That haul included a stunning four-goal performance against unbeaten league leaders Brann, as Haaland hit four goals inside the opening 21 minutes to secure a 4-0 win for Molde.

That quartet of goals was Haaland’s sole hat-trick in Norwegian football, before departing his homeland with a record of 20 goals in 50 appearances for Molde.

Haaland signed for Red Bull Salzburg on a long-term contract in January 2019 and scored once in five appearances across the second half of the campaign.

The following season saw Haaland explode however, with a run of performances that soon made the teenager a household name across Europe.

Haaland scored 28 goals in just 22 games for Salzburg across the first half of the 2019/20 campaign, a run which included five hat-tricks.

Haaland scored four domestic trebles including hat-tricks home and away against Wolfsberger, in addition to an unforgettable Champions League debut for Salzburg.

Haaland struck three first-half goals on his first appearance in the competition as Salzburg thrashed Genk 6-2, becoming the eighth player to score a hat-trick on their Champions League debut. Two further players – Mislav Oršić (for Dinamo Zagreb) and Sebastien Haller (for Ajax) – have since achieved the feat.

Haaland also became the first teenager to score more than once on his Champions League debut since Rooney’s hat-trick for Manchester United against Fenerbahce 15 years earlier.

The Norwegian moved to the Bundesliga side during the 2020 January transfer window and wasted no time in making an impact, scoring a debut hat-trick within just 23 minutes after coming on as a substitute against Augsburg.

Haaland was introduced with Dortmund trailing 3-1, but inspired a turnaround that saw the Germans win 5-3 in a thriller.

Haaland scored 41 goals in 41 appearances during his first full season at Dortmund, including a game in which he netted four goals in just 32 minutes of a 5–2 away victory against Hertha BSC. He ended the campaign as the Bundesliga’s Player of the Season, despite a record-breaking 41-goal campaign from Robert Lewandowski.

Despite injury problems in 2021/22, Haaland added further hat-tricks against Wehen Wiesbaden and VfL Bochum to make it four in Dortmund colours.

A first hat-trick in the Premier League saw Haaland take the game away from Crystal Palace last weekend, as the champions recovered from two goals down to win 4-2 at the Etihad.

This was the sort of performance for which Haaland was signed, showing the predacious qualities which have already made the Norwegian one of world football’s finest finishers.

Bernardo Silva’s goal brought City back into the game, before Haaland took centre stage with three finishes to claim the match ball. He headed home Phil Foden’s cross for the equaliser, before putting City ahead with an instinctive effort from close range.

His third was the best of the lot, collecting Ilkay Gundogan’s pass before holding off the challenge of the defender to fire home. It’s now six goals in four games for Haaland, who has already emerged as the favourite for the Golden Boot.

Haaland has hit two hat-tricks for the national side in an international career which has seen the forward average almost a goal-per-game.

The Norwegian first made headlines for his nation at the FIFA U-20 World Cup in 2019, when he scored a record-breaking nine goals in a 12-0 win over Honduras. Despite Norway’s elimination in the group stage and Haaland failing to score in another fixture, he claimed the tournament’s Golden Boot.

Since stepping up to the senior side he has scored 20 goals in 21 games for Norway, including hat-tricks in wins over Romania and Gibraltar. Already joint-ninth among the nation’s all-time leading scorers, he needs just 14 more to move past Jørgen Juve and claim Norway’s national record.