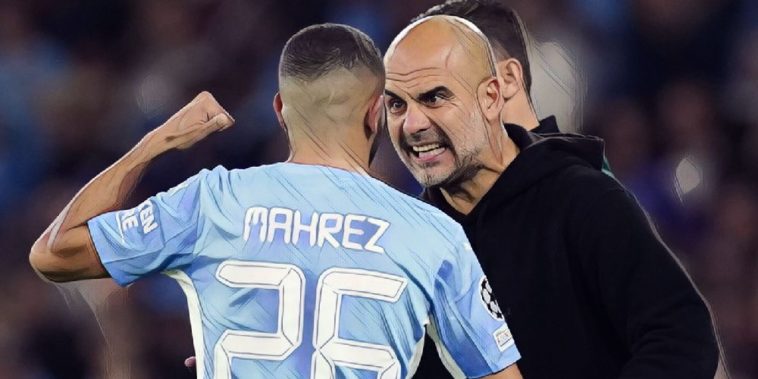 Man City boss Pep Guardiola has opened up on his touchline frustrations after being filmed giving Riyad Mahrez and Jack Grealish a rollicking during their 6-3 Champions League win over Leipzig.

It was a pulsating nine-goal thriller at the Etihad, with City opening up a two-goal lead through a thunderous Nathan Ake header and a comical own goal from Nordi Mukiele.

Leipzig would hit back before halftime through Christopher Nkunku, only for City to respond quickly with a stoppage-time penalty.

Nkunku would go on to net twice more to grab his hat-trick, but City consistently responded within five minutes to restore their two-goal cushion, before Gabriel Jesus added some gloss to the scoreline late on.

Despite the emphatic win, perfectionist Pep Guardiola was visibly frustrated with two members of his side, angrily dishing out touchline instructions to forwards Grealish and Mahrez, who both scored on the night.

Speaking after the game, the Catalan was asked about his passionate delivery of instructions.

It doesn't matter how well you're playing, if you don't do your defensive duties Pep Guardiola will tell you all about it 😤#UCL pic.twitter.com/f9ZQFxaq4w

“We spoke in half-time about the way we have to do it and they didn’t do it,” he told BT Sport. “Fights happen.

“They are so good, they make four players in the build up to attract you behind the holding midfielders where there aren’t a lot of players, where the ball goes outside and they are so fast when they attack in behind.

“It’s not easy to control it but when you regain that ball there are many players in front of the ball and in the transition to make one or two passes in behind you have a chance to attack.”

Grealish – who netted a fine curling strike on his Champions League bow and swung in the corner for Ake’s opener – refused to go into too much detail about his manger’s ‘useful information’.

“That was just defensive work, I won’t go too much into it because he might want the same tactics at the weekend,” he told the broadcaster.

“That’s what the manager is like, he’s always wanting more defensively and offensively, and he’s obviously someone that I’m going to listen to after everything he’s done in the game. He’s just giving out useful information.”

Man City face Southampton at the Etihad at the weekend.