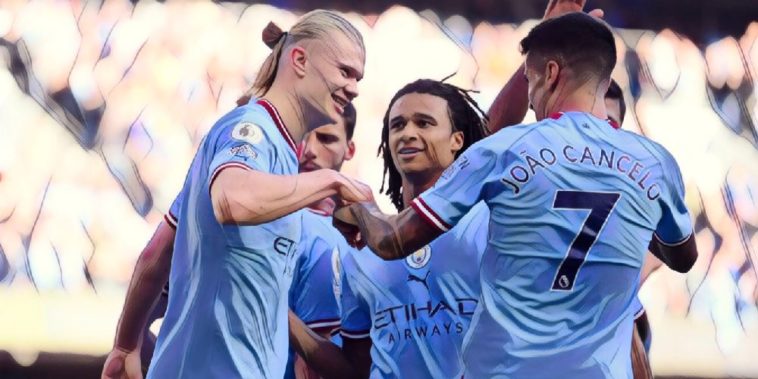 Manchester City moved to the top of the Premier League with a predictably convincing 4-0 win over Southampton.

The two sides came into the game in contrasting form, City so far unbeaten in all competitions this season and already racking up 40 goals in the process, while Southampton had lost four of their last five to leave Ralph Hassenhuttl under pressure.

Unsurprisingly, the early passages of play went as the form book would suggest, and the Citizens took the lead in the 20th minute through Joao Cancelo. The Portuguese was allowed to advance down the left, and having shaped to shoot with his right, he jinked to the left to wrong foot James Ward Prowse, before firing across goal and past former City ‘keeper, Gavin Bazunu.

Phil Foden – fresh off the back of his Manchester derby hat-trick – then made it two after 32 minutes. City dispossessed Southampton in the middle of the field before Kevin de Bruyne drove with the ball towards the Saints box. The Belgian playmaker laid it off to Foden who clipped it over the onrushing Bazunu.

Four minutes into the second half and City netted their third, with Joao Cancelo again advancing down the left in the buildup. This time, the full-back cut it back to Rodri on the edge of the box who produced a delicious clipped ball into Riyad Mahrez at the back post who timed his volleyed strike to perfection.

While the one-sided nature of the scoreline wasn’t a surprise, the lack of Erling Haaland’s name on the scoresheet perhaps was, though with 65 minutes on the clock, the Norwegian netted his 20th of the season. Cancelo was again instrumental in the buildup, attacking down the left before playing a low cross into the area that the striker finished off with a first-time finish from eight yards.

20 GOALS IN ALL COMPETITIONS FOR MAN CITY 😱

We're only in October… pic.twitter.com/hpnnmvCfye

Speaking after the game, Pep Guardiola said his side were ‘much better’ than they were in two games between the sides last season (both draws), but reckoned some of his players were still ‘not at their best’.

“The result is good, we play quite good,” he told the BBC. “We struggled to break their high pressing. Last season we suffered a lot against them but today we were much better.

“Some players were not at their best but we create a lot of chances. We were solid. It was a good game.

“For a long time Phil Foden is playing really good. The impact from him is great.

“Erling Haaland had the chances again. He scored a brilliant goal. It’s an incredible weapon for us, a big threat. I am so satisfied.”

The result moves Man City above Arsenal to the summit of the Premier League ahead of the Gunners meeting with Liverpool on Sunday, and Guardiola is looking to be near the top going into next months World Cup.

“We will see the result from Arsenal and Liverpool, always in Premier League there are good games.

“Being close to the top of the league is important going into the World Cup.”