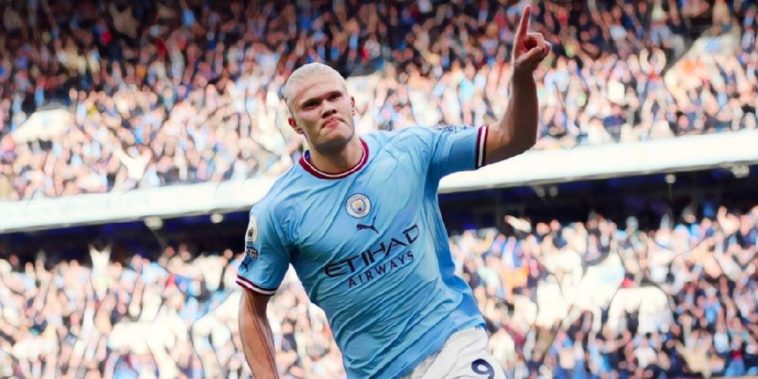 Erling Haaland added another two goals to his already ridiculous goalscoring tally to help Manchester City to a 3-1 win over Brighton at the Etihad.

Manchester City came into the game looking to get back to winning ways after last weekend’s defeat to Liverpool had left them four points adrift of early pace-setters, Arsenal.

It wasn’t the brightest of starts to this game at the Etihad, with neither side mustering a shot on target in the opening 20 minutes.

However, having failed to score or assist for the first time this season during last weekend’s defeat at Anfield, Erling Haaland opened the scoring in the 22nd minute as he latched onto a pinpoint long ball from Ederson. The Norwegian chested the ball past the onrushing Robert Sanchez before outmuscling and shrugging off Adam Webster’s challenge and rolling the ball into an empty net.

City almost had a brilliant second just after the half-hour mark, though Jack Grealish’s shot was blocked following some good work down the right from Riyad Mahrez, Bernardo Silva and Kevin de Bruyne.

The hosts had already had a penalty shout waved away, and in the 40th minute, they would have another shout for a spot kick after Lewis Dunk brought down Bernardo Silva. After consulting the pitchside monitor, referee Craig Pawson pointed to the spot, before Haaland stepped up to smash home the resulting penalty, leaving Sanchez with absolutely no chance.

Brighton regularly play some nice football, though their struggles have often come with putting the ball in the onion bag, however, shortly into the second half they did pull one back through the in-form Leandro Trossard. The Belgian was allowed time to strike from the edge of the box, with his effort beating Ederson at his near post.

With 15 minutes to go, Trossard forced a big save out of Ederson to keep the scores at 2-1, before City quickly worked the ball up the other end of the park, with Kevin de Bruyne unleashing an unstoppable strike into the top corner from all of 25 yards to make sure of the points.

Kevin De Bruyne now has 11 Goals + Assists in the Premier League this season. Only Erling Haaland (20) has more.

This is getting out of hand. 💥 pic.twitter.com/TBO7Yq5ZLU

The result moves Manchester City back to within a point of Arsenal at the top of the Premier League ahead of their trip to face Southampton on Sunday, and speaking afterwards, Pep Guardiola said it was ‘one of the toughest’ games that his side have faced.

“A really tough game, one of the toughest but I can’t complain about my team,” he said.

“Brighton played man to man and it’s not really easy, with the ball they are really, really good.

Erling Haaland’s brace takes him to 17 Premier League goals for the season, already eclipsing the 15 scored by City top scorer Kevin de Bruyne in the entirety of last season.

“Obviously the numbers are incredible and there’s no doubt about his quality. He’s not the best [striker I’ve worked with, Lionel Messi is] but one of the best I’ve faced for sure.

“He is so ambitious and he helped us win the game.”