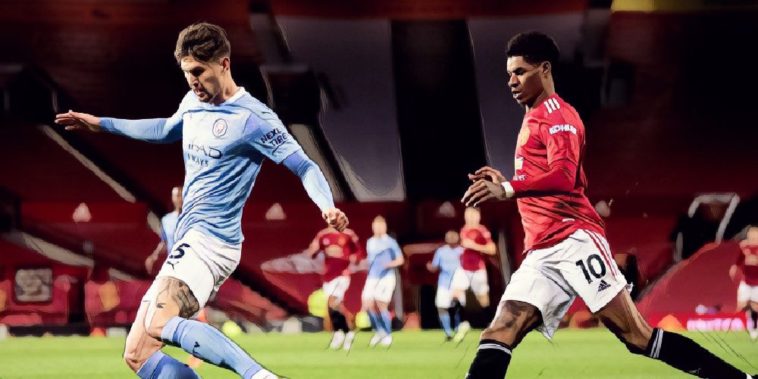 Manchester United and Manchester City played out a 0-0 in what was a Manchester derby that won’t live particularly long in the memory.

Both team came into the game after inconsistent starts to the season, and it was a first half in which both sides looked somewhat afraid of fully committing themselves in attack, with Man City imparticular a long way short of some of the slick football that they have demonstrated over the last three seasons.

Saying that, City did have the better of the first-half chances, Man Utd defenders scrambling to block Raheem Sterling’s early effort, while Riyad Mahrez saw his shot saved by David de Gea before Kevin de Bruyne blazed over the rebound.

As is often the case, United remained a threat on the break and created chances of their own, though their final ball was often found lacking while they did look threatening from set-pieces.

The second half began in much similar style, though City were handed a reprieve as VAR overturned a United penalty for an offside in the buildup after Kyle Walker had kicked Marcus Rashford.

All in all, it was a game which was massively lacking in quality and urgency with neither manager’s changes really attempting to alter the pattern of the game as both seemed scared of being hit with a sucker punch.

Man City have now failed to score in their last 242 minutes on the road in the PL, their longest wait for an away goal under Pep Guardiola.

They last netted away from home on Halloween. 👻 pic.twitter.com/NMKY4XdNuE

Speaking after the game, Pep Guardiola suggested that a draw at Old Trafford would prove to be a ‘good point’, suggesting he was wary of United’s threat on the counter-attack after the Red Devils won three of their four meetings last season.

“United is always a strong team, this is Old Trafford and in a few details, they are out of the Champions League. They score when they can run but we controlled them really well.

“It is not a [normal] derby, it would be different with the people [in the stands] and maybe they [would have] pushed more. It is different every week without the people, the virus is still there, you have to be careful.”

The result leaves City eighth in the table, though next up is a midweek game where they host struggling West Brom at the Etihad.