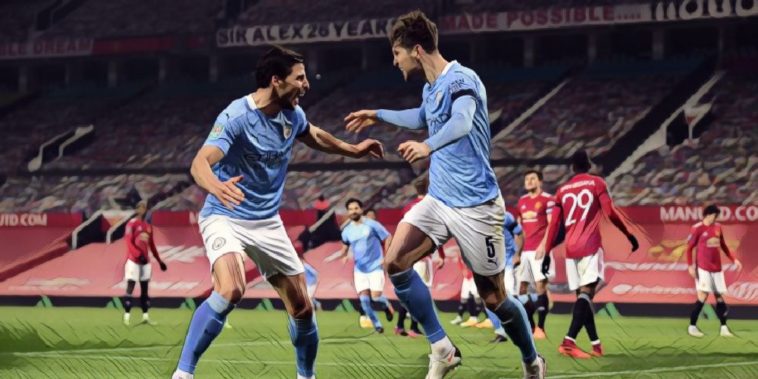 Manchester City remained on course for yet another League Cup triumph, dumping rivals Manchester United out of the semi-finals for a second successive season.

It was a game that wildly contrasted the drab 0-0 draw that the two sides played out in the Premier League last month, and both sides would see a goal apiece chalked off for offside within the opening five minutes.

Kevin de Bruyne thundered an effort against post in the 13th minute, while Phil Foden saw his effort ruled out for yet another offside in what was a lively opening.

However, it was Man City who dominated the majority of the ball, and early into the second half, Pep Guardiola’s side would take the lead. Phil Foden put in a decent delivery from a free-kick on the left, the ball evaded every Manchester United player, before hitting the thigh of John Stones to open the scoring.

After the goal, City looked more content to sit and defend and wait for the spaces to emerge, though in truth Manchester United rarely looked like threatening Zack Steffen’s goal having gone a goal behind.

With seven minutes to play, City booked their place in a fourth successive EFL Cup final as United once again failed to effectively deal with a set-piece. Aaron Wan Bissaka’s headed clearance from a De Bruyne corner landed at the feet of veteran midfielder Fernandinho, who hit a sweetly struck volley low into the bottom corner with ‘keeper Dean Henderson seemingly unsighted.

16 – Manchester City have now had 16 different goalscorers in all competitions this season, more than any other Premier League team. Secure. pic.twitter.com/9FpfexZhhh

“It’s for Colin Bell and his family,” he told Sky Sports. “He helped to build something special for this club. It’s an incredible victory for us to beat United away and it was for him absolutely.

“The team is ready and it was an outstanding performance. We dipped a little bit in the second half, we were tired after the game at Stamford Bridge but when the team has this mentality they can do something incredible. It’s not the Champions League but four times in a row to reach the final – I’m so impressed.

“I think that was our first goal from a set-piece. Lately, we have been close to scoring on set-pieces and tonight we scored two goals.

“It’s about the consistency. We didn’t have a proper pre-season and that’s why we need a little bit of time but I think we are already there.

The result means Manchester City have a chance to win a fouth successive League Cup, with Guardiola coming up against his old adversary, Jose Mourinho, his Spurs side having seen off Brentford 2-0 in the other semi-final last night.

The Catalan did however refuse to get too carried away about the meeting, with the final having been put back to late April in the hope that some fans can be in attendance.

“[The final] is not next week, the game will arrive at the final. We will be in the best possible condition. Tottenham are a top team but we won’t think about it yet.”

Next up for the Citizens is an FA Cup third round tie against Birmingham.

Read – Revealed! The 10 most valuable footballer’s on Planet Earth