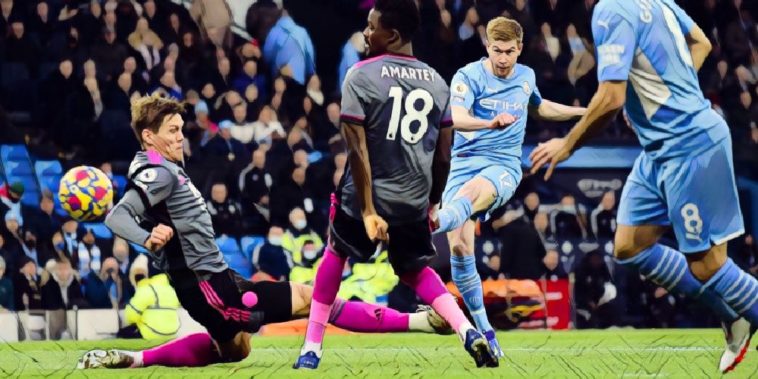 Manchester City were the victors as they played out a nine-goal Christmas cracker, surviving a comeback scare to run out 6-3 winners over Leicester.

There were certainly no Christmas hangovers as Manchester City got off to a rapid start, and they would get their reward in just the fifth minute. Fernandinho clipped a ball into Kevin De Bruyne, who was afforded far too much space to control the ball and turn, before firing past Kasper Schmeichel.

The reigning champions would be handed the chance to double their lead from the spot in just the 13th minute after Youri Tielemans hauled Aymeric Laporte down in the box at a corner, and after initially being turned down, Chris Kavanagh reversed his decision after consulting with VAR. Former Leicester City forward Riyad Mahrez stepped up to take the resulting penalty, firing high into the top corner.

Two became three with just 21 minutes on the clock after Ilkay Gundogan tapped home from six yards after Schmeichel had tamely palmed the ball into his path following a Joao Cancelo ball from the right.

While City were impressive, Leicester were woefully off the pace at the back, and Tielemans’ lazy challenge on Raheem Sterling inside the box saw Pep Guardiola’s side awarded a second penalty, the England international stepping up to convert the resulting spot-kick to make it four inside the opening 25 minutes.

With the scores at 4-0 at the break, Man City looked out of sight, though Leicester gave themselves hope of a comeback with two quickfire goals before the hour mark. First, the in-form James Maddison finished off a lovely goal after beating his man in midfield, laying off the ball to former City forward Kelechi Iheanacho before continuing his run and slotting the return ball past Ederson.

Maddison would again be involved as the Foxes quickly netted a second and he again found Iheanacho, though this time the Nigerian picked out Ademola Lookman who made it 4-2 with 35 minutes to play.

Incredibly, Leicester would net a third 10 minutes later, Maddison again instrumental in the buildup as his long range effort was tipped onto the bar by Ederson, before Iheancho got a goal of his own as he tapped home the rebound from close range.

However, with Brendan Rodgers side closing in on one of the Premier League’s most unlikeliest of comebacks, Man City defender Laporte would restore his side’s two-goal lead as he leapt highest to meet a Riyad Mahrez corner as he headed home.

City made sure of the points as Raheem Sterling netted his second with three minutes to play, and speaking afterwards, Pep Guardiola said it was an enjoyable game to watch, while praising the attacking quality of Leicester.

“It was a Boxing Day game. It was a nice game to watch and three more points,” he told BBC Sport. “We keep going. The quality of players we have produced this amount of actions to score goals. No manager and tactics can solve it without the quality.

“It was weird. Even at 4-0 in the first half, every time they had the ball they arrived in the final third delivering good passes. They moved a lot of players. They have a lot of quality. They are a master of counter-attacks.

“They changed in the second half. The way they played they didn’t play to press high. They were close. The game was so dangerous.”

The Catalan is often the perfectionist, though decided against being critical of his side’s defending, with Ruben Dias being easily beaten in the buildup to Leicester’s first goal.

“We didn’t play bad in the second half. Ruben Dias was not aggressive because he was one yellow card away from being suspended so he was more cautious.

“The game was not over. With set-pieces we could win the game.”