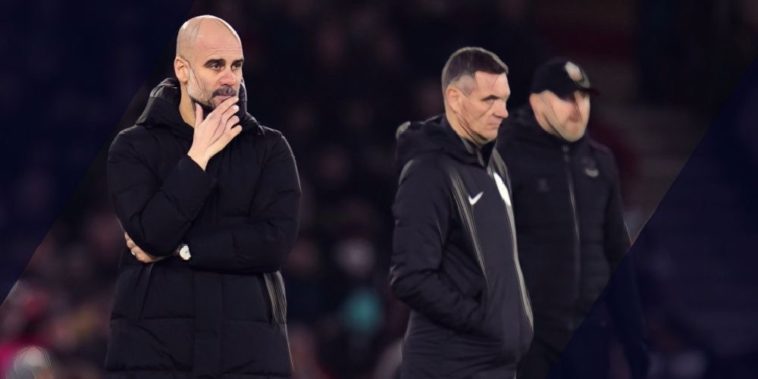 Manchester City’s 12 match winning run was brought to a halt on the South Coast this evening as Southampton earned a 1-1 draw against the Champions.

City have been in scintillating form of late, winning 15 of their last 16 games in all competitions, including 12 straight wins in the Premier League to opening up an 11 point lead over Liverpool at the top of the table ahead of their trip to St Marys.

Unsurprisingly, the Blues would dominate possession throughout, though in the seventh minute, they would go behind following a fine strike from Kyle Walker-Peters. The former Spurs full-back advanced down the right and played a one-two with Nathan Redmond, receiving the ball back before curling a superb finish beyond Ederson with the outside of his boot on the half-volley – the defender’s first Premier League goal.

Raheem Sterling squandered a couple of opportunities in the first half as City went in search of an equaliser, only for Southampton to put in an excellent defensive showing, with Mohammed Salisu particularly impressive throughout

Man City would however draw level in with 25 minutes left to play, Aymeric Laporte finding himself unmarked to head home a curled Kevin de Bruyne free-kick from the right, the Belgian’s latest assist equalling David Beckham’s tally of 80 to move into the Premier League’s top 10 rankings.

De Bruyne, along with Rodri and Gabriel Jesus, all struck the woodwork as City continued to dominate, with 15 of their 20 attempts coming in the second half, although they were ultimately unable to break down Ralph Hassenhuttl’s side.

The result means that Liverpool and Chelsea can close the gap to City when they play Crystal Palace and Tottenham respectively on Sunday, but despite dropping points, Pep Guardiola insisted his side put in a good performance.

“It was a good entertaining game and we make an exceptional performance,” he told BBC’s Match of the Day.

“Before the goal we started well with good build up, and the last 25 minutes of the first half and the whole of the second half was brilliant. We would love to score more and win but in the end we are happy with the performance.

“They defend well and are incredible on the counter-attack but I thought we passed really well. Armando Broja and Che Adams are so strong and it is not easy to contain them, but we did it.

“The result is the result, but the performance is much better than at Arsenal, for example, where we won. The last games we played against Southampton over the last two or three seasons, this was our best performance. I can see they are happy with the points and congratulations to them.

“I feel as a manager confident for the future with the way we are behaving. Without the ball, everybody helps each other. I know how difficult this stadium is, with the way they play and how good we have played.”

The Catalan was insistent before the game that there was still plenty of work to do in order to claim the title despite their large lead at the top, and he was seemingly bemused at suggestions that this result had all of a sudden blown the title race open.

“I don’t understand the way people say that now, after this result, the race is open, when before it is over,” he said. “But this is your job to talk about that. I would love to be 40 points ahead of Liverpool and Chelsea, but that’s impossible. I would never expect to be in this position, with this margin.

“Today we showed the same consistency we have been showing. If people saw in the game that we were lazy or arrogant or trying not to win the game. It was completely the opposite.”