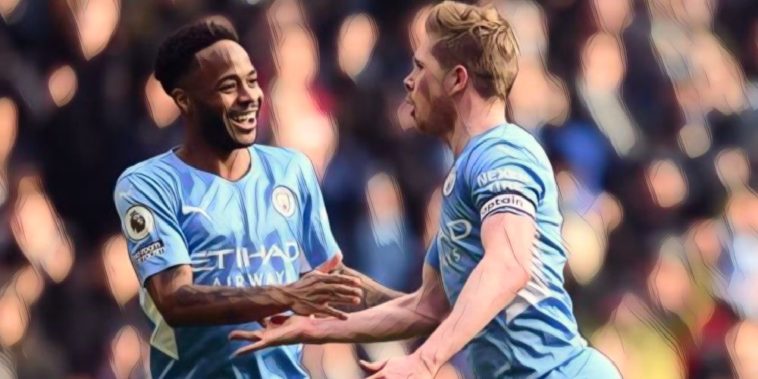 Pep Guardiola is refusing to get carried away with Man City’s 13 point lead at the top of the Premier League following their 1-0 win over title challengers, Chelsea.

It was a game that was a repeat of last season’s Champions League final in which Chelsea of course were victorious, though the two teams came into this fixture separated by 10 points at the top of the Premier League.

It would be league leaders Manchester City who were thoroughly dominant throughout the first half, outnumbering Chelsea’s midfield pair and keeping the visitors pinned back in their own half, with Romelu Lukaku cutting an isolated figure.

The first real big chance of the game came with six minutes of the first half remaining, the Citizens pressing Chelsea into a mistake on the edge of their own box, only for Jack Grealish’s effort from inside the area to be smartly saved by the leg of Kepa Arrizabalaga.

It was a pattern that would continue in the second half, with Chelsea again pinned back, and seemingly being reluctant to play it forward towards their centre-forward.

The breakthrough would finally come with 20 minutes to play, Kevin de Bruyne receiving the ball on the half-turn from Joao Cancelo, riding a challenge from N’Golo Kante, before curling a sumptuous finish beyond Kepa from the edge of the box.

Chelsea brought on Timo Werner, Callum Hudson-Odoi and Mason Mount in the second-half in a bid to try change the pattern of the game, though it was to no avail as City continued to control proceedings and hold onto their 1-0 lead to open up a 13 point lead at the top of the table.

Against Chelsea, Kevin De Bruyne ranked first or joint-first among players on the pitch for:

The difference in a huge game. 👏👏 pic.twitter.com/KMfv9DWkkq

Speaking afterwards, Pep Guardiola said his side were ‘brilliant’ against an ‘incredible’ Chelsea side.

“(We) Absolutely deserved it,” he told BT Sport. “The way we played, everything we have done, we cannot forget who we played, they are Euro champions, and how incredible a side they are. They defended well, they waited for transition to punish us and we won from one transition.

“The only problem we had was after we went 1-0, they stepped up, they ended with Mason Mount, Callum Hudson-Odoi, Timo Werner, Romelu Lukaku all on the pitch, but the team were brilliant.”

Guardiola praised the quality of Kevin de Bruyne, though admitted he is looked to push him even more.

“We have won what we have done together, and now I want to push him more, he is a world class player, he has humility, is humble. He has won three Premier Leagues and a lot of prizes, but I want more, because I know he can do it. He has everything, he missed a bit of confidence this season, he struggled a bit but he knows what he can do. His mum and dad have to be so proud of him.

Guardiola was however refusing to get carried away with their lead at the top of the table, pointing to the fact that Liverpool – currently 14 points behind – have two games in hand

“If Liverpool win their games in hand it is eight points, so my job is to take out of the heads of the players what people will say. We are more than pleased but there is a lot of a job to do.”