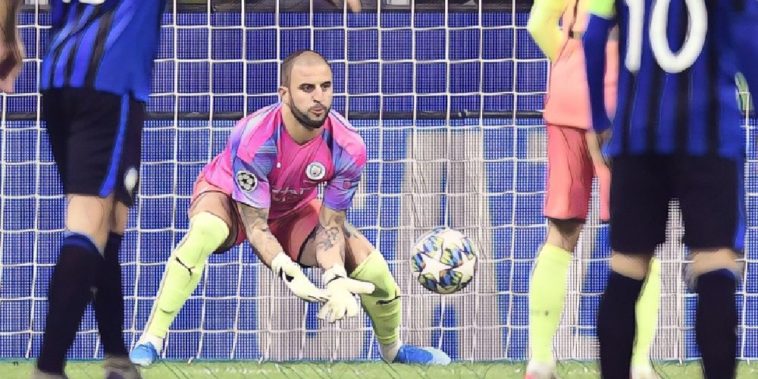 Pep Guardiola has admitted that his Manchester City side were made to suffer during their Champions League draw with Atalanta.

The Premier League champions went into Wednesday nights game at the San Siro as overwhelming favourites, Man City knowing a win secure their place in the knockout stages of the Champions League.

Despite taking the lead through Raheem Sterling in the seventh minute, the England international scoring his fifth European goal of the season, City were held to a 1-1 draw thanks to Mario Pasalic’s 49th minute equaliser.

The result was compounded by Gabriel Jesus’ woeful missed spot-kick in the 42nd minute, and speaking afterwards, Pep Guardiola rued Man City’s missed opportunities, only four of their 10 shots being on target.

“In this competition, you know you have your chances and moments and you have to take it,” Guardiola told BT Sport.

“But with the problems we have, we made a good first half. First half we were outstanding and [in the] second we suffered. In the last 15 minutes we had the issue with the new keeper.

It was a game that provided the hugely irregular, but highly entertaining scenario of an outfield player playing in goal, Kyle Walker being asked to don the gloves following Claudio Bravo’s 81st minute red card, the Chilean only having replaced Ederson as a half-time substitute.

With Man City due to travel to face Liverpool at the weekend, Pep Guardiola was unsure if his first choice ‘keeper was set to miss the game at Anfield: “I don’t know right now,” he admitted.

The Catalan boss also insisted that the game changed following Jesus’ missed spot-kick toward the end of the first-half.

“The second half we didn’t do exactly what we should do. It was few chances conceded against one of the teams who create more. It was a perfect result away and we need one more point to go though.

“When we land in Manchester we will think about the next game in the Premier League.”

The failure to beat Atalanta, combined with Shakhtar Donetsk’s draw with Dinamo Zagreb means that City’s wait for qualification to the knockout stages goes on, the Etihad outfit five points ahead of both sides in Group C with two games to play.

Rating Every player to score 50+ goals for Pep Guardiola teams