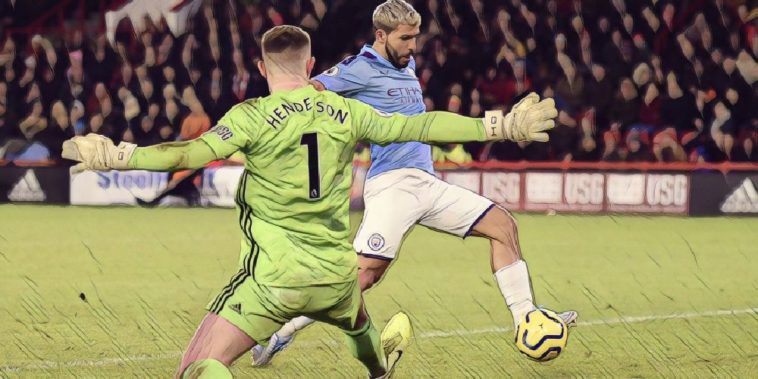 Pep Guardiola was pleased after seeing his Manchester City side produce a ‘solid performance’ to earn a narrow 1-0 victory at Sheffield United on Tuesday night.

Substitute Sergio Aguero scored the only goal of the game on a difficult evening at Bramall Lane, the Argentine turning home Kevin De Bruyne’s low cross for his sixth goal in his last three Premier League outings.

Gabriel Jesus had earlier seen a penalty saved by Blades goalkeeper Dean Henderson following a foul on Riyad Mahrez, the on-loan Manchester United shot-stopper making a series of fine saves to deny the champions a breakthrough prior to Aguero’s winner.

The win keeps Man City in second and closes the gap on leaders Liverpool to 13 points ahead of their trip to face Wolves on Thursday, and Guardiola admits he was pleased following his side’s performance on a frustrating evening against Chris Wilder’s ‘physical’ side.

“They are so physical and they arrive with a lot of men in the last 18-yard box. It was a solid performance, we only conceded two chances. In the first-half, the keeper made two incredible saves.

City opted to field a back three system with Aymeric Laporte returning from his long term knee injury, the Frenchman lining up alongside Nicolas Otamendi and Fernandinho in defence for his first appearance since August.

The 25-year-old’s return is a welcome boost to Guardiola following his lack of defensive cover so far this season, though Laporte was understandably substituted during the second half after beginning to fatigue.

Speaking on Laporte’s return, Guardiola said: “We knew that Aymeric couldn’t play for 90 minutes, that’s why we played five at the back to protect him a little bit. He’s a crucial player for us, we’ve missed him, it’s good for us to have him back.”

Having seen his side come through a difficult midweek test in South Yorkshire, Guardiola added that he was pleased with City’s level of control as the club bounced back from last weekend’s dramatic draw with Crystal Palace.

“I am so happy with the team. I know what it’s like to play here, it is a tough tough place. We controlled it well and in the end, we created chances to win.”