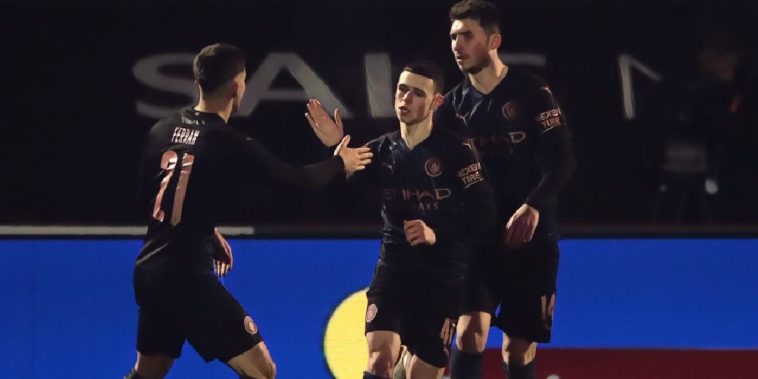 Manchester City survived a scare to book their place in the FA Cup fourth round, scoring three late goals against League Two side, Cheltenham.

Pep Guardiola made a number of changes to his side against the fourth-tier outfit, and while they dominated possession, the first half was relatively a well-contested affair.

Cheltenham skipper Ben Tozer was excellent throughout the game, and the 30-year-old produced a  superb defensive header off the line to deny Benjamin Mendy from opening the scoring with a vicious strike.

Tozer’s trademark long-throw had caused problems throughout, and in the 59th minute it was the catalyst to the shock opener, Man City defender Aymeric Laporte failing to deal with the throw allowing Alfie May to nip in to poke the loose ball into the roof of the net.

Guardiola called on some of his big guns in a bid to get back into the game, and with just nine minutes left to play, it was substitute, Joao Cancelo, who produced a moment of quality, the full-back’s floated cross being met by the impressive Phil Foden at the back post who finished first time.

Four minutes later and the six-time FA Cup winners turned the tie around, veteran midfielder Fernandinho playing an excellent floated ball over the top of the Robins defence, Gabriel Jesus just managing to stay onside, taking a touch before finishing past Joshua Griffiths.

Cancelo was involved again as City rounded off the scoring, playing the ball into fellow substitute Ilkay Gundogan who cut the ball back from the byline, leaving summer signing Ferran Torres to tap home from close range.

Speaking afterwards, Pep Guardiola admitted he was well aware of Cheltenham’s aerial threat before the game, and didn’t regret the number of changes he made to his starting line up.

“I didn’t have regrets even when we were 1-0 down, we had clear chances from the first minute,” he told BBC Sport. “When they take advantage it gets complicated but we got it to 1-1 and it was tight. We came here with humility and had the quality to make the difference.

Phil Foden has scored nine goals for Man City across all competitions this season, already surpassing his goals tally from last term (8) and now the most within a single season in his career so far.

Bailing City out with his equaliser. pic.twitter.com/oJSYgVyPXx

“They used their quality in the box, they are taller and better than us there and we showed clips on how to solve it. It is difficult to control that.”

Phil Foden continued his impressive recent form, his goal taking him to nine for the season to make him City’s top scorer for the campaign, and Guardiola was impressed by the England international’s performance.

“Phil Foden is in a great moment and with great confidence. he is clinical in front of goal and he had a similar chance to the goal we scored at Stamford Bridge and he is playing really well.”

The win books City’s place in the fifth round where they will face Championship high-flyers, Swansea City. Before that though, they return to Premier League action against West Brom on Tuesday evening as they look to maintain their title push.

“Next one is West Brom, big Sam Allardyce has incredible experience and one step at a time.”

Read – The Magic of the FA Cup: Recalling one of the craziest fourth round matchdays ever