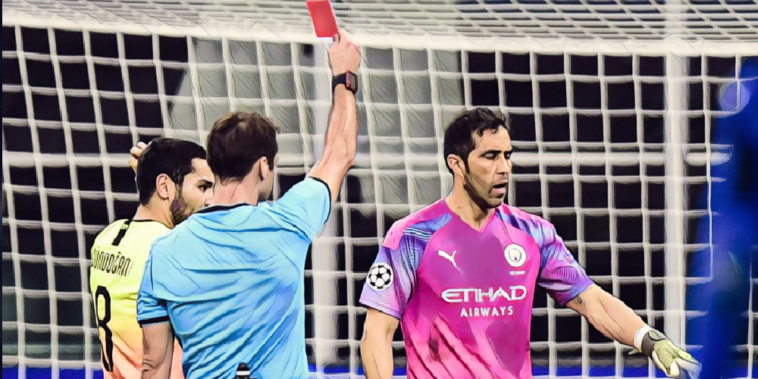 Manchester City manager Pep Guardiola insists he has ‘no doubts’ over Claudio Bravo after confirming Ederson will miss this weekend’s huge clash at Liverpool through injury.

The Brazil international was substituted with a muscular problem as a precaution during the club’s midweek Champions League draw at Atalanta, though Guardiola has now confirmed the 26-year-old will miss Man City‘s short trip to Anfield as a result.

Veteran shot-stopper Bravo, who replaced Ederson at the San Siro and was subsequently sent off, is set to deputise in goal.

“He is out,” Guardiola confirmed at his pre-match press conference.

21 – Of the last 40 shots on target that Claudio Bravo has faced in the Premier League, he's only saved 19 and conceded a goal with 21 of them. The Opta expected goals on target tally for these 40 shots was just 12.6. Recall? pic.twitter.com/ND2eLvfgEc

Bravo has endured an indifferent time in English football since moving to the Etihad three years ago, though Guardiola offered a prickly response when asked about the 36-year-old’s ability to step-up in a crucial fixture against the league leaders.

“Why should I not be confident with my players and my teams,” Guardiola responded. “Why do you ask these kind of questions, ‘do you have doubts because the player who plays regularly doesn’t play…?

“I saw him every day in training sessions and how good a goalkeeper he is. We are not going to lose for Claudio. The red card against Atalanta was because we lost the ball in a dangerous position.

“You have to respect this guy, he is 33/34 years old, [and has spent] his whole career in the top incredible level. He won the Copa America, so respect the guy, he’s an incredible top top goalkeeper.

“In the first season when he was a little bit struggling in the Premier League when he came here, it was because the team was not at the top level. The problem was not Claudio”.

City travel to Merseyside in what is the latest instalment of a growing rivalry between the two sides. The Premier League‘s top two are currently separated by six points following Liverpool‘s unbeaten start, and this weekend’s result could potentially have huge implications on this season’s title race.

Read – Guardiola admits he is open to managing in Serie A