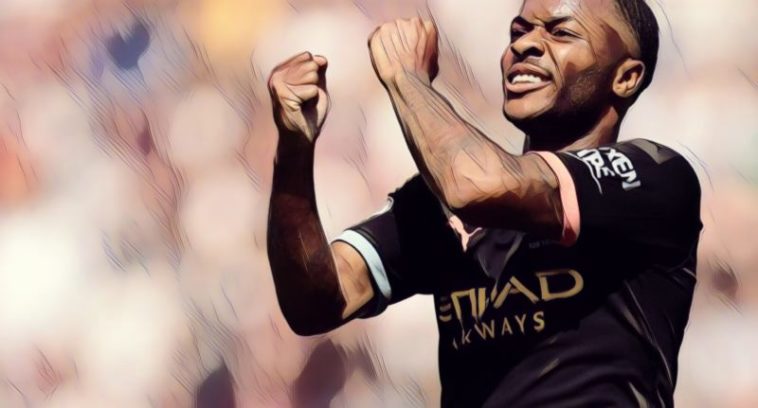 Pep Guardiola has lavished praise on the shoulders of Raheem Sterling, describing his movement and goal-scoring instincts as ‘incredible’.

After just two Premier League games, Sterling is the joint top scorer in the division with four, netting a hat-trick against West Ham on the opening day of the season.

Speaking ahead of today’s game with Bournemouth, Pep Guardiola has praised Sterling’s willingness to learn and improve, something he believes he has done under his stewardship at Man City.

“I think he’s a better player,” Guardiola said. “His desire to be better is a credit to him.

“Every player is good when they understand what we want to do as a group. After that it is about his desire to be better, to improve his skills and to talk about him.

? Man City started the game by looking to exploit Spurs' right-hand side and Sterling beat his man to head home the opener – and his fourth in two appearances

“He reacts incredibly to our talks, when Mikel [Arteta] speaks to him or myself. That’s nice, when they don’t feel like we are pushing or criticising them.

“He is open [to advice]. He has been from day one. That’s why he is an incredible, exceptional player.”

While Sterling has played through the middle for the back-to-back title winners on occasion, he has generally operated on the flanks for Guardiola’s side, and the former Barcelona boss described Sterling’s qualities both on and off the ball as ‘incredible’.

“Normally, for a winger to score goals and be top scorer, it is not easy because they play further away from the goal,” Guardiola added.

“He has an incredible sense of arriving in the box and scoring when the ball is on the opposite side. He is fantastic at that.

“When he plays more central all his movement is towards the goal and for a winger that is incredible.

“Some players play well but they forget the ball is there. He always has the sense of where the ball will be and will attack there because if it arrives, he will score a goal.”