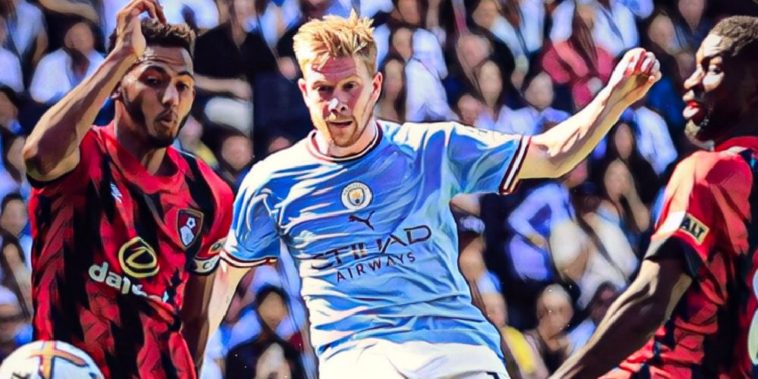 Manchester City moved to the top of the early season table with a comfortable 4-0 win over Bournemouth at the Etihad.

Having despatched of West Ham in their Premier League opener last weekend thanks to an Erling Haaland double, Man City wasted no time to get the ball rolling against the newly promoted Cherries.

In just the 19th minute, Ilkay Gundogan played a give-and-go with last weekend’s hero, Haaland – the Norwegian using his strength to hold off the pressure of the Bournemouth defence before finding Gundogan’s darting run into the box before he fired across goal to finish into the bottom right-hand corner.

City’s second came through a moment of individual brilliance as Bournemouth’s defenders backed off Kevin de Bruyne’s run into the box, before the Belgian executed a superb outside-of-the-boot effort into the far corner.

De Bruyne turned provider as Phil Foden made it three seven minutes before the interval, before a Jefferson Lerma own goal rounded off the scoring with 11 minutes to play.

Speaking after the game, Pep Guardiola said his side had to be ‘patient’ at times, and was quick to praise Bournemouth’s organisation.

“As a team we did a really good performance,” Guardiola said. “Bournemouth were incredibly well structured defensively, but not just defensively offensively as well.

“They attract you with the short passes and then switch the play. Quite similar movement to how Tottenham try to do it. Defensively they defend so deep and narrow, you have to go outside.

“We started really well, with three or four corners and we had chances. After we scored one or two, they don’t want to attack and we had to be patient.

“It is not easy for many reasons. We made a really good performance again.”

Having ended the game with a goal and an assist, the City boss was full of praise for Kevin de Bruyne’s ‘incredible’ display, saying the Belgian is no longer solely focussing on being his side’s creative genius.

“I think Kevin, since last season, before he was just concerned with assists, now he is enjoying winning games and scoring goals,” Guardiola said. “The pleasure to score goals is big. It is important against that he scored a goal.

“When I was in Munich he was in Wolfsburg and I think he was the best player in the Bundesliga. He was a really good player before we arrived and he will be good after us.

“The goal was good. There was no space with this type of shot and it was an incredible goal.

“It was an incredible performance, the assist for Phil came from him.

“Against Bournemouth it is difficult to do because they defend the box and they hold their line really well.”