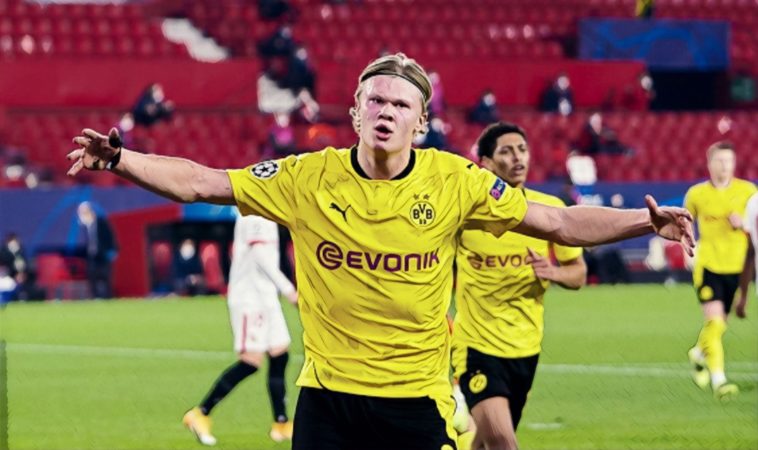 Pep Guardiola has once again been quizzed on the talents of Erling Haaland ahead of Man City’s Champions League meeting with Borussia Dortmund.

The Norwegian is the talk of European football at present following his simply stellar goalscoring form since moving to the Westfalenstadion, netting 49 goals in 50 games for Der BVB.

Such form, and the presence of a €75 million release clause in his deal which becomes active in 2022, has sent speculation wild that Borussia Dortmund will look to maximise their profits by selling the striker this summer.

Barcelona, Real Madrid and a whole host of Premier League sides have been heavily linked with the 20-year-old, with Manchester City looking for a long-term replacement for the departing Sergio Aguero.

Pep Guardiola has recently insisted that his side simply couldn’t afford a move for Haaland – who is said to be valued at €150 million (£128m) – and ahead of Tuesday night’s clash against Dortmund, the Catalan explained why he thought it may not be money well spent.

“Spending a lot of money on one player doesn’t give you an advantage to win,” he told the media at his pre-match press conference. “Football is a team game, everyone makes a contribution. Competitions are not won by one player, it is every player.

“So far the club has decided not to spend close to £100m for a player. Maybe in the future it will happen when the club decides it is necessary to improve the team for the next 5-10 years but so far the organisation decides not to do it and that’s why we didn’t do it but maybe in the future.”

Despite distancing his side from making a move, Guardiola said Haaland’s talents was blatantly evident, even to ‘a blind guy’.

“All I can say is he is an exceptional striker for his age,” he added. “The numbers speak for themselves. He’s a fantastic player, that’s all.

“In that age scoring that amount of goals is not easy to find. The numbers speak for themselves. When that happens it is because he can score right, left, counter, box, header. He’s a fantastic striker. Everybody knows it. A blind guy can realise he is a good striker. It is not necessary to be a manager.”