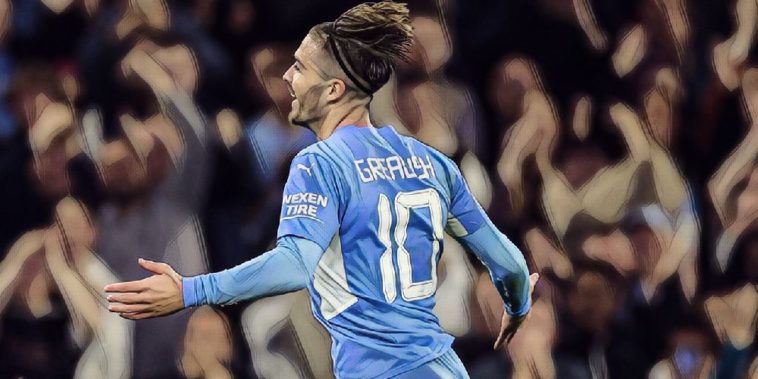 Pep Guardiola has explained why he signed Jack Grealish and has discussed the record signing’s adaptation at Manchester City.

Grealish became the first £100m player in British football history after signing for Man City in a record-breaking deal from Aston Villa during the summer, with the England international having impressed since making the move to the Etihad.

The 26-year-old has featured in European football for the first time this season and has scored once and provided one assist in two Champions League appearances for the club.

City travel to face Club Brugge in the competition tomorrow evening and ahead of the clash Guardiola has discussed how Grealish has settled in since his club-record arrival.

“We spoke about that and what he has to live when he is not here, in terms of eating, resting and sleeping,” Guardiola said.

“What he has done so far is excellent, apart from Burnley he has played every game at a good level and I’m sure he will improve. As a manager, you have to know the best position, but he has played very well.

“He is focussed on and off the pitch and he is strong, his weight and body fat is perfect and he is mentally is in the right position. It is the first time he plays every three days. We play every three days for 11 months and it’s difficult but it is a good challenge for him.”

The arrival of Grealish adds to an already heavy contingent of creative talents at City, with competition for places including the likes of Phil Foden, Riyad Mahrez and Raheem Sterling amongst others.

Asked why Grealish was targeted during the summer window, Guardiola highlighted the midfielder’s ability to ‘attract opponents’ and says it is important the Premier League champions have options ahead of a long season.

“The quality in the final third. He is able to attract opponents and find his mates.

“We have many players but we added another one because we have a lot of games in many competitions. He is at a perfect age and when you are on top in those competitions, the squad must be removed a little bit otherwise it is difficult.

“Everyone has to feel the pressure from the new ones, and the news ones have to understand what the club has done. All the big clubs do it.”