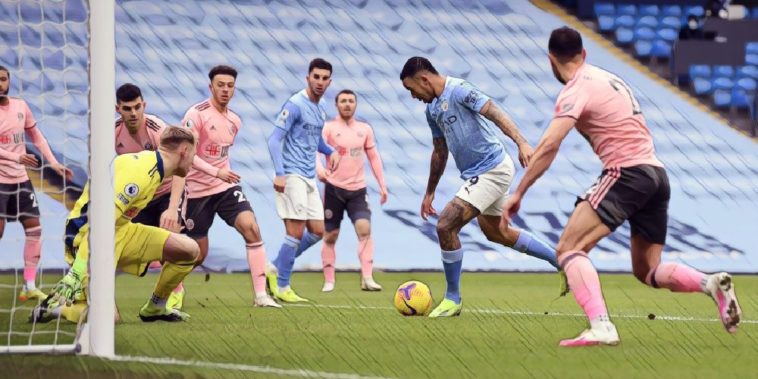 Manchester City cemented their position at the top of the Premier League with a 1-0 victory against bottom side, Sheffield United.

Sheffield United defended resolutely to beat Manchester United in midweek, but they were all over the place as Manchester City took the lead in the ninth minute. Ferran Torres wriggled past two Blades defenders on the byline before squaring it to the unmarked Gabriel Jesus in the six-yard box who had the simple task of picking his spot and firing past Aaron Ramsdale.

The South Yorkshire outfit have been sloppy at the back this season, but have rediscovered an element of defensive resilience in recent weeks, and despite City’s domination of the ball, clear cut chances were at a premium for either side as the Premier League strugglers looked to keep it tight and hit on the counter.

Oleksandr Zinchenko forced a save out of Ramsdale with a stinging effort from the edge of the box midway through the second half, while John Fleck rasped a strike wide with just five minutes to go following a Billy Sharp layoff as the visitors looked to snatch a point.

Speaking afterwards, Pep Guardiola was delighted with his player’s attitude and determination in what was a ‘difficult’ game for his side as their extended their winning run to 12 matches in all competitions.

“It was so difficult. We knew it would be,” he told Sky Sports. “It was amazing after this run of 12 wins in a row. Still the players run and fight like animals. We conceded one chance at the end. Sheffield United are a difficult opponent. Every time we play them we struggle.

“We said this will be one of toughest games of the season and it was. The weather is the same for both sides. It’s so difficult because they defend with 10 players. Their team have been together a long time so they know what to do. Nothing is given just because we are blue.

“We started good. We maintained it in the second half. We struggle because they are a very good side. They are alive, you can feel it. They shout, they talk, they stick together until the end.”

Next up for Man City is a trip to face Burnley at Turf Moor on Wednesday evening before travelling to face Liverpool next weekend.