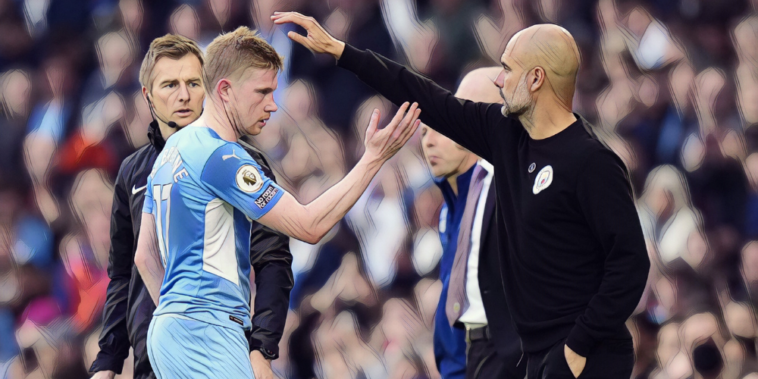 Pep Guardiola has defended Kevin De Bruyne’s recent form with the Manchester City midfielder having struggled to find his best performances this season.

De Bruyne has fallen below the excellent standards that saw him crowned as the PFA Player of the Season in both the 2019/20 and 2020/21 campaigns, with the Belgium international substituted before the hour mark during City’s 2-0 defeat to Crystal Palace this weekend.

The 30-year-old’s withdrawal with City trailing was an indication of his recent struggles, but Guardiola has defended De Bruyne and insists the midfielder remains an ‘important’ part of his side.

“Everything we have done in these years is thanks to a person like him,” Guardiola said at his post-match press conference.

“He is such an important player for us and is an excellent person. He’s trying more and more every single day.

“[On Saturday] he made a step forward in many things. At 10v11, we tried to put him more in the side to create with his talent to our strikers.

“In the end, we decided to put Joao [Cancelo] on that side to be more up and down. We didn’t get the good result but it is always difficult in 10v11.

“Whether players play or rest is my decision. Our standards as a team individually and collectively are so high.

“We know how difficult it is to maintain it – but not just him: Riyad [Mahrez], Raheem [Sterling] – all the top players who have helped us to achieve what we achieved over the past four or five years.

“In seasons, there are highs and lows and big moments and it’s important to be strong here and positive and next Wednesday [against Club Brugge] is another challenge, another opportunity.

“This is what it is. Kevin knows it. He has done more than good since he arrived here, and he wants to continue to do it.”

The defeat to Palace was the second successive fixture in which City have failed to score, having been eliminated from the Carabao Cup on penalties following a goalless draw with West Ham in midweek.

Guardiola says he is happy with his side’s overall ability to create chances but says City must become more clinical following their shock loss to the Eagles at the Etihad.

“We are a team who are able to do it but against teams who defend deep sometimes it’s difficult to find the right moment to punish them.

“We created lots of chances against West Ham and conceded few and today it was the same again except for the five/ten minutes.

“We produced more but we have to score more goals, we knew it.”