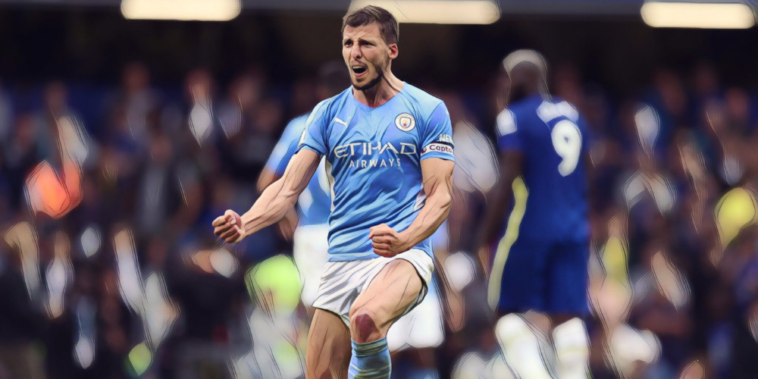 Pep Guardiola has confirmed that Ruben Dias is fit to return as Manchester City take on Atletico Madrid in the Champions League quarter-finals on Wednesday.

City travel to the Spanish capital in possession of a 1-0 aggregate lead, as the Premier League champions look to book their place in the last four.

Guardiola has been handed a boost ahead of the clash after Ruben Dias returned to training, with the centre-back having been out of action since sustaining a hamstring injury in early March.

“He [Dias] travels with us, and the rest all of them are fit.” said Guardiola at his pre-match press conference.

“The fact he’s back is incredible. We have a big schedule until the end of the season. Everyone will be important.”

Guardiola spoke on the importance of a solid defence in his side’s pursuit of major silverware, with City having conceded just 20 goals in the Premier League so far this season.

“You cannot win things if you don’t concede few. Riyad, Phil, Gundo, they are not defensive players but they run from day one, solid as a team. Solid tomorrow, it will be difficult to get to the semi-finals.”

City faced a stubborn Atletico Madrid defence in the first meeting at the Etihad, as the Spanish visitors sat deep defensively in a bid to soak up the pressure.

Kevin De Bruyne’s goal provided City with a 1-0 win, however, and Guardiola is expecting a ‘different game’ given Atletico’s need to turnaround the tie.

“It will be a different game, not like last week. They’re at home with their fans behind them. From what I remember from knockout games they have really exciting moments in the Calderon, at the Wanda they create probems, defend and counter.

“They will be more intense in the top half of the field than they were the other night. We adapt and if we’re losing we go with everything to get it back. If we’re on top maybe we sit a bit deeper.”