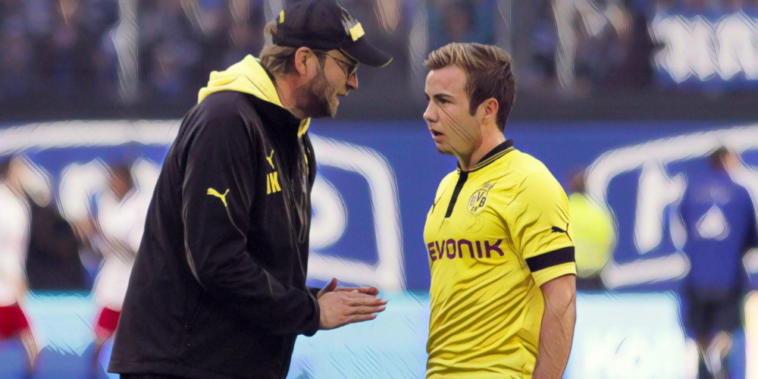 Mario Gotze has admitted his regret at turning down Liverpool and has compared Jurgen Klopp and Pep Guardiola.

Gotze burst onto the scene as a bright talent in Klopp’s impressive Borussia Dortmund team, winning back-to-back Bundesliga titles before becoming the most expensive German player in history with a £31.4m move to Bayern Munich.

The midfielder scored the winning goal as Germany won the World Cup in 2014, but his career has since failed to maintain such heights with a metabolic condition having impacted the 29-year-old at his peak.

Gotze is now at PSV Eindhoven and will form part of the side that will take on Leicester in the Europa Conference League quarter-finals on Thursday evening.

Gotze’s three season spell with Bayern Munich brought further silverware but he struggled to command prominent status in the side, before returning to Borussia Dortmund in 2016.

Before that move, he spoke to Klopp about the prospect of signing for Liverpool and admits he regrets turning down the chance to reunite with his former manager at Anfield.

“We are still in touch and we spoke back then about me coming to Liverpool,” Gotze told the Mail. “But I wasn’t in a state of mind where I could consider it, that’s why it didn’t happen.

“Do I regret it? It’s always difficult to look back but if you ask me now then yeah, I should have joined Liverpool for sure. I just made a wrong decision but it’s not a regret.

“Klopp probably made the biggest impact on my career. He can be very demanding – he can be your friend but also very harsh at the same time. It pushes you to great performances. That’s what happened with me back then, and it’s happened with Liverpool now.

“He is a manager not just for the players but everyone at the club, and then one-on-one he can be a friend as well as a boss. Can I imagine working with him again? I can imagine that, yes – we’ll see.

“He’s a good coach, for sure. He and Pep Guardiola are the most important coaches and characters I had in my career.”

Gotze opened up on the differences between Klopp and Pep Guardiola, having worked under both coaches during his spells at Bayern and Dortmund.

The German previously claimed that Guardiola lacks empathy after a challenging spell in Munich, but has since altered his view on his methods and has backed Guadiola’s Manchester City to come out on top in the Premier League title race between his two former managers.

“Klopp’s strength is speaking to players in a certain way, helping them,’ Gotze explained. ‘But if you meet Pep off the field he’s a great guy. You can speak to him about family, private stuff, so he’s a great person.

“But if you play in his team he is very demanding. That’s a good thing because he’s pushing you a lot but sometimes you need a different angle as a player.

“Back then, though, I was used to Klopp and this was my comparison. When I look now, I like what Pep does – being distant sometimes, keeping high-performing athletes together. Maybe I would do it the same way.

“The title race in England this season is great to watch. It looked very different a few months ago but I believe in the end City will do it. That is my guess.”