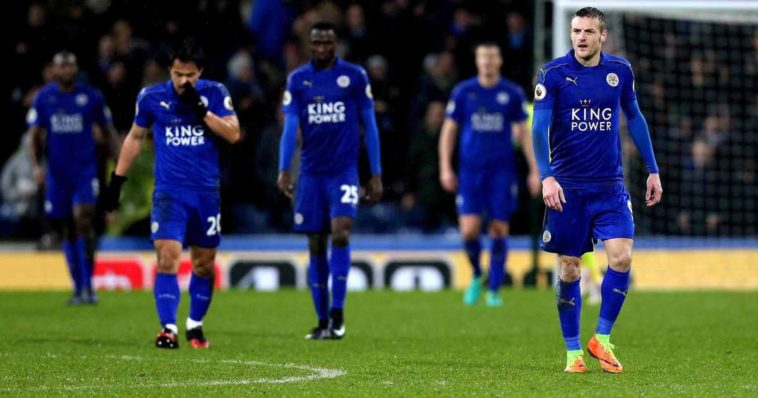 We all marvelled at the Foxes Fairy Tale last year when Leicester City went from relegation favourites at to winning the Premier League at a canter. A 5000-1 possibility.

Leicester won the league by a comfortable 10 point margin, losing just 3 games all season with a plus 32 goal difference.

They scored 68 goals (3rd highest) and had the 2nd tightest defence with 36 goals conceded.

They have since won ESPN Team of the Year and an award at the BBC Sports Personality of the Year along with Riyad Mahrez being named PFA Player of the Year (just pipping team mates Vardy and Kante to the award).

The euphoria got so mad that lifelong fan and ex player, Gary Lineker presented Match of the Day in his underpants.

Fast forward 9 months and Leicester are 1 point above the relegation zone and 2 points off the bottom of the table. After 24 games of this season they have won just 5 games, they have already conceded 41 goals scoring just 24 in reply.

In 2017 so far, they have collected one point, at fellow strugglers Middlesborough. They are yet to win a game and are yet to score a Premier League goal.

So what happened to last season’s superstars?

There are many theories;

I have a closer theory.

Last season, Ranieri’s champions went out of the FA Cup at the 3rd round stage and lost on penalties to Hull in the 4th round of the League Cup. They were not in Europe and had just the Premier League to focus on.

This week, Leicester play Derby in an FA Cup replay, and in two weeks’ time they travel to Spain to face Sevilla in a two leg tie in the last 16 of the Champions League.

In their successful season Ranieri used just 18 players to win the league.
10 of those 18 players made more than 30 appearances in a Premier League season of 38 games.

Goalkeeper Kasper Schmeichel and Captain Wes Morgan were ever present. The entire back five picked itself on more than 30 occasions.

The midfield of Kante, Drinkwater and Albrighton played north of 33 games last season enabling Ranieri to pick almost the same team week in week out.

Up top, Vardy missed just two games through suspension with Mahrez missing only two games himself.

As a club, Leicester had 13 different goal scorers in their triumphant season.
Jamie Vardy scored 24 goals with Mahrez bagging 17 goals – this is as many as the entire team have scored so far this season.

This season they have played 24 Premier League games, winning just 5 games and losing 13. They have accumulated only 21 points and shipped 17 more goals than they have scored.

This season they have used 23 different players in 24 games with only 11 different goal scorers. By contrast, Vardy has scored just 5 but is joint top goal scorer with summer signing Islam Slimani.

I can hear what you are saying. You are pointing out that this is an inconclusive stat to winning the league by 10 points. Is it?

Chelsea are currently 9 points clear after 24 games winning 19 of those games and losing just 3 times. They have a plus 34 goal difference and the second tightest defence.

Guess what? They have used just 16 players in those 24 games. 7 players have made more than 20 appearances. Three of the players are ever present; Goalkeeper Courtois with defenders Cahill and Azpilicueta. Kante and Hazard have only missed one game each.

Similarly to Leicester last season, 4 of their back five has picked itself on more than 20 occasions. In addition to that, 3 of their midfield have selected themselves on more than 21 occasions.

My theory. Leicester won the league because the tinker man didn’t need to tinker.

This season, Chelsea will win the title (probably by Easter) with roughly the same team week in week out and no other distractions. Chelsea have not played in Europe this season following their 10th place finish last year and also went out of the League Cup in the Fourth Round.

You don’t need money to buy the Premier League – you need minimal distractions and a settled squad.