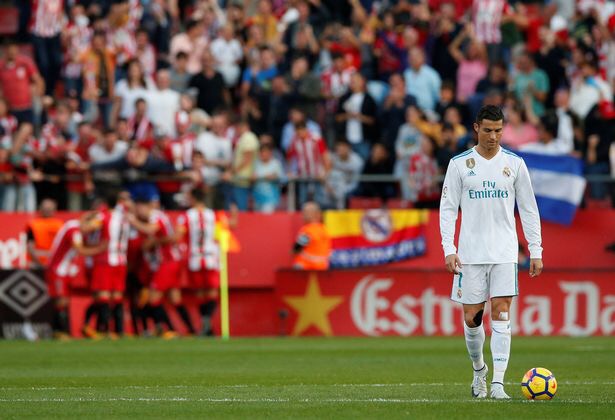 Real Madrid dropped points again, this time at the hands of Girona. The result comes as a shock but was a deserved win for the minnows.

Another bad result, another horrific performance, this has been the story of Real’s season so far. Girona, who would have normally been smashed last season, have come away with a good victory against Los Blancos. The nature of the Catalan club’s victory, in which they came back from behind worsened the mood of fans even more.

Girona had an equal amount of efforts, but Real dominated possession. The Montilivi Stadium was filled with Catalan flags, with the ongoing independence crisis.

The promoted side had the first few good chances of the match. Most notably, loanee Maffeo’s effort looped over Casilla, hitting the crossbar.

Real struck from a good counter-attack, Ronaldo’s shot was parried by goalkeeper Yassine Bounou and Isco put the ball home. Isco seemed to be the only player playing with passion and desire in the whole team, with most of the others looking dull and complacent.

Girona kept attacking in the second half, and turned the game around in a period of four minutes. Former Middlesbrough forward Christian Stuani scored the equaliser, minutes before Portu put Girona up front.

Real were dull, repetitive and did not look like a team which is considered to be the best in the world. The finishing and play in the final third was lacklustre, as it has been for most of the season, the defence was wide open.

Los Blancos are now a massive 8 points behind league leaders Barca and need a major change to have a chance of winning the league.