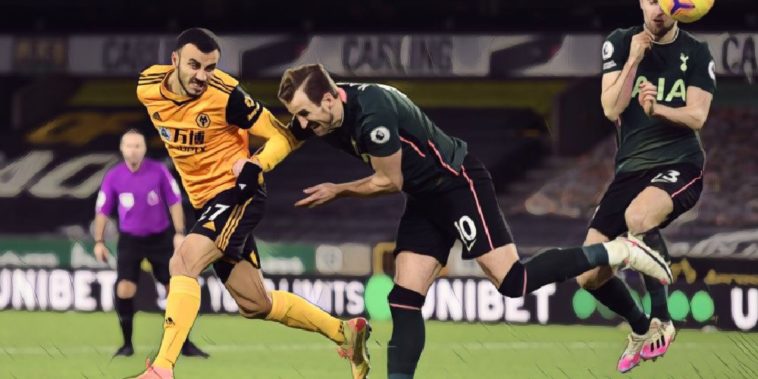 Jose Mourinho pointed the finger of blame for Spurs’ 1-1 draw with Wolves at his player’s lack of ‘ambition’ and ‘desire’, as their winless run in the Premier League continued.

Tottenham wasted no time in taking an early lead, with the ball arriving at the feet of Ben Davies after Wolves failed to deal with a corner, before the Welshman laid it off into the path of Tanguy Ndombele at the edge of the box who fired home from the edge of the box after just 57 seconds.

Spurs have certainly not been afraid to sit back and defend a lead under Mourinho this season, and as Wolves looked to get back into the game, that’s certainly how the pattern of the game progressed.

Nuno Espirito Santo’s side created a number of good chances throughout, with Daniel Podence and Pedro Neto particularly lively, though on a number of occasions were guilty of being unable to produce the final pass.

However, their persistence finally paid off as they made Spurs pay for their lack of adventure, Roman Saiss flicking on an 86th minute header from a corner after making a dart to the near post.

Spurs had more shots on target inside the opening 60 seconds against Wolves than the rest of the match combined:

Nothing since the 21st minute. 😳 pic.twitter.com/1bQj2ZqRTY

However, the Spurs boss seemed to suggest that is was his players who lacked ‘ambition’ and ‘desire’ to go for the win having taken an early lead.

“One point against Wolves normally wouldn’t be a bad result because they are a strong opponent,” Mourinho told Sky Sports.

”But scoring in the first minute and having 89 minutes to score more, there’s a sense of feeling frustrated.

“I know the way I prepare the team, I know all that and don’t want to say much more than that. We didn’t have that ambition or desire to go for more.

The draw means Spurs missed out on the chance to move up to third, the north London side now winless in their last four, with a home game against Fulham up next on Wednesday evening.