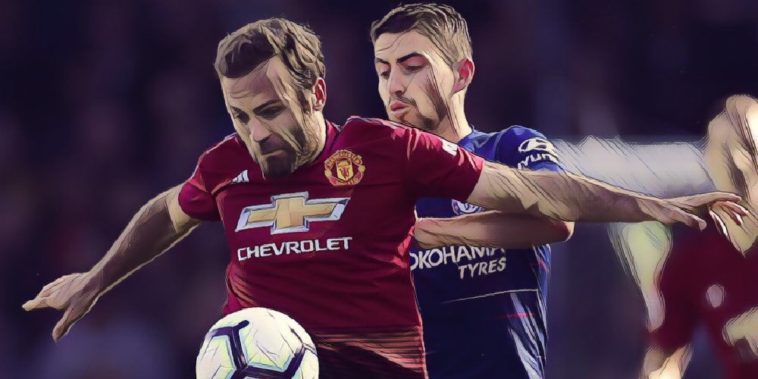 Chelsea maintained their unbeaten start to the season thanks to a late equaliser from Ross Barkley after an Anthony Martial brace had put Manchester United 2-1 ahead at Stamford Bridge earlier today.

Here are five things we learned from Saturday’s game…

The lost art of defending is still lost

Oh what Manchester United would give for Ferdinand and Vidic in their ranks, and how Chelsea would love to have Terry and Carvalho back in their pomp, because the ancient art of defending seems to be woefully lacking.

United midfielder Paul Pogba got totally lost in the 21st minute, allowing Antonio Rudiger to run away from him to get onto the end of a corner to power a header past David de Gea. For the equaliser, Victor Lindelof went to sleep for a fraction of a second, but he allowed Ross Barkley to run into an open space to smash the ball home.

However, at the other end in the second-half especially, United looked like they could score whenever they liked at times, as Chelsea’s back line are seemingly still struggling to revert to a back four under Maurizio Sarri having played with a back three for the last two years.

While some of Chelsea’s defending was poor, there was nothing poor about Anthony Martial’s finishing.

Having been an integral part of Manchester United’s comeback victory over Newcastle last time out, and with Alexis Sanchez having only arrived in England on Friday morning after international duty with Chile, Martial was offered another chance to impress, and my word didn’t he do just that.

The first of his brace saw him cooly control the ball before firing a fine half-volley past Kepa Arrizabalaga, before his second was a trademark goal, cutting onto his right foot and curling it just inside the far post to give United the lead.

He is starting to finally show the form that he showed on his arrival in the Premier League in 2015, and he could be set to dislodge Alexis Sanchez as the first choice left winger.

A lot of Chelsea’s good work this season has been thanks to summer signing Jorginho, who has acted as a metronome for the Blues, dictating play from his central midfield base.

The Italian has already broken a number of records for the number of touches and passes in a game this season, but Jose Mourinho was able to nullify his threat by playing Juan Mata in a more central role.

The 26-year-old made just 65 passes today, meaning that he was unable to feed his fellow midfielders as well as dangermen Eden Hazard and Willian with as much regularity as we have been used to seeing in recent weeks.

Lukaku shows he can be an influence against top six

Romelu Lukaku is often criticised for his lack of goals against the top six, and while that poor record continued today as he failed to find the net once again, he showed that even if he isn’t scoring, he can be a handful against the top sides.

While he was fairly anonymous during the first half, Lukaku caused all sorts of problems for the Chelsea back line in the second period, holding the ball up, flicking it on, running the channels, and making space for his teammates.

Hazard on the receiving end of rough justice from United – again

He has been the star man in the Premier League this season, but Manchester United did what they have often done in recent seasons to stop the Belgian…kick him.

Manchester United’s players seemingly queued up to take a chunk out of the Chelsea number 10 who was fouled five times throughout the game. However, while it was an unsportsmanlike approach from the Red Devils, it had the desired effect, as Hazard was limited to just four shots, of which only one was on target.