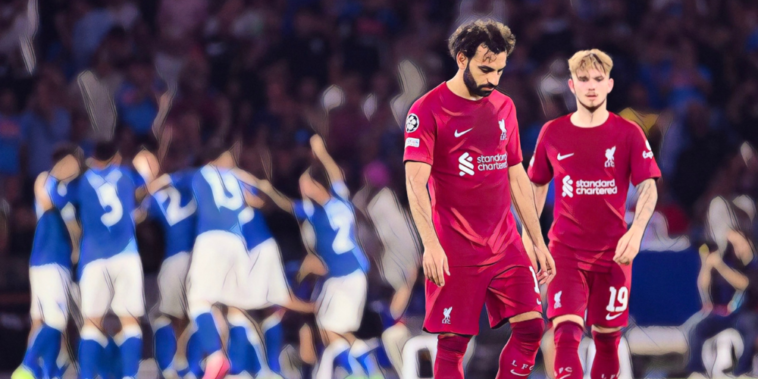 After the postponement of the weekend’s Premier League fixtures, England’s representative clubs will return to action with Champions League football this week.

Ahead of Matchday two of this season’s Champions League group stage, we look at five talking points.

Forget and reset for Liverpool?

Liverpool’s stuttering start to the season reached a new low on Matchday one, as the Reds were thrashed 4-1 at Napoli.

The manner of the defeat has led to an inquest, with Liverpool fortunate to be just 3-0 down at half-time as the Italians cut through Jurgen Klopp’s team like a hot knife through butter. Joe Gomez endured a Neapolitan nightmare, Trent Alexander-Arnold’s awareness was again questioned and Virgil van Dijk has looked a shadow of his former self during the season’s opening weeks.

The postponement of the weekend’s fixtures will have given the Reds a chance to reset and regain some of their absent compliment, with Thiago and Joel Matip expected to return to the starting side after making their returns as substitutes at Napoli.

We host Ajax in #UCL action next. pic.twitter.com/UKz8s4dniV

Available changes to the midfield and backline are limited due to a lack of personnel, though a refresh further forward could be welcomed as Ajax visit Anfield on Tuesday evening. Darwin Nunez and Diogo Jota will both be hoping for a recall after starting the loss at Napoli on the bench.

Klopp’s team are unbeaten in 10 games on home soil in all competitions, while there most recent defeat at Anfield – a 1-0 loss to Inter Milan – counted for nothing as the Reds progressed from that tie.

Back-to-back Anfield games with Ajax and Rangers could decide the Reds’ fate, after big wins for Napoli and Ajax on Matchday one.

Lewandowski back at Bayern

Robert Lewandowski’s departure from Bayern Munich was one of the transfer stories of the summer, as the forward called time on his decorated career with the German giants.

Lewandowski left Bavaria with eight Bundesliga winners’ medals and the Champions League among his honours, while a record of 344 goals in 375 games leaves the Poland international second to only Gerd Muller in both the Bundesliga and Bayern’s all-time goal charts.

Replacing a forward who has averaged 45 goals per season since 2015 is an impossible task and Bayern have shown teething issues in adapting to life post-Lewa, drawing three consecutive league games.

Julian Nagelsmann’s team did make a strong start in Europe however, with a dominant performance to win 2-0 at Inter Milan. The Bavarians now face the task of stopping their former talisman, as Lewandowski and Barcelona arrive at the Allianz Arena on Matchday two.

Barcelona are already feeling the effects of signing Lewandowski, who has hit the ground running in Spain to lead La Liga’s goal charts. A hat-trick on his Champions League debut for the Catalans has taken his total to nine goals in just six games and Bayern will know better than anyone that stopping Lewandowski will be key to the right result.

Graham Potter is set to take charge of Chelsea for the first time on Wednesday evening, as the Blues take on Red Bull Salzburg at Stamford Bridge.

Chelsea will want to bounce back from defeat at Dinamo Zagreb last time out, a result which brought an end to Thomas Tuchel’s reign with Potter named as his replacement.

The decision to leave Brighton for Chelsea will have been based on a desire to compete at this level and there will be much intrigue about how the 47-year-old lines up his side on debut.

"For some I recognise that the change that comes so suddenly in football can be hard to accept."

Potter preferred a 3-4-3 system at Brighton and it is one that Chelsea have used regularly in recent months. That could aid his adaptation to the role, as the west Londoners look to get their campaign back on track against a Salzburg side who held AC Milan to a 1-1 draw on Matchday one.

There’s a bubbling optimism at Paris Saint-Germain following a start to the season which has seen the club’s superstars shine.

Lionel Messi, Neymar and Kylian Mbappe have all combined encouragingly during a strong start, one which has seen the Parisians score 25 goals in just seven Ligue 1 fixtures.

A win over Juventus in their Champions League opener has also improved the mood around PSG, with Kylian Mbappe scoring both goals. After a mixed first season, Messi also appears to be finding his groove and has 10 goal involvements (3G / 7A) in just seven leagues games so far this season.

Messi will hope to use this season as a chance to close in on Cristiano Ronaldo’s UCL record, with the latter not featuring in the competition for the first time since 2003. Messi is 15 goals behind Ronaldo’s all-time record and an impressive season could make a substantial dent in that gap.

Maccabi Haifa are the next side aiming to stop PSG’s formidable front three as the the French champions look to emerge as credible contenders for the competition.

Is this City’s season?

Manchester City sent out a statement of intent with a 4-0 thrashing of Sevilla on Matchday one, as the Premier League champions made light work of the Spanish side.

City’s have been strengthened significantly by the summer signing of Erling Haaland, who scored twice in Seville and has now netted 12 goals in just eight games for the club. Haaland’s record on this stage is phenomenal, with 25 goals in his first 20 Champions League appearances.

For context, no footballer has reached that milestone faster with Ruud van Nistelrooy and Filippo Inzaghi the next quickest (30 games). Kylian Mbappe and Lionel Messi each took 42 games, while Cristiano Ronaldo did not score a single goal in his first 20 appearances in the competition.

City have shown some signs of vulnerability defensively in the season’s opening weeks, but in Haaland possess a trump card that the club will hope can end their European wait. Former side Borussia Dortmund arrive at the Etihad this week, looking to halt Haaland in his tracks.