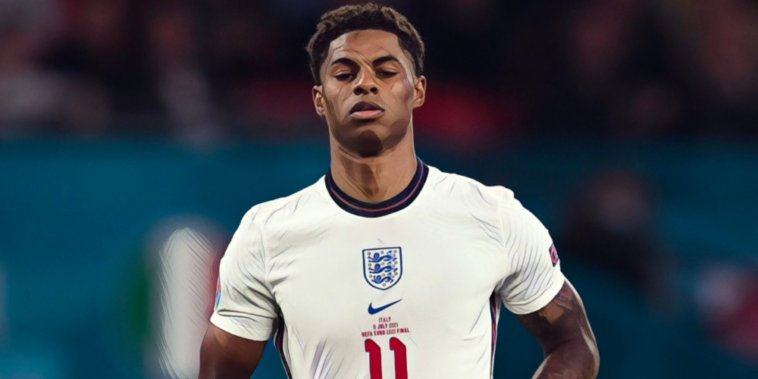 The 2022 World Cup in Qatar is fast approaching in what will be uncharted territory for the tournament, with the finals set to be staged mid-season due to the temperatures in the Middle East.

Gareth Southgate has just two more fixtures to prepare his squad before the Three Lions opener against Iran in November, and has plenty to ponder after a disastrous start to the Nations League campaign.

A strong start to the season could propel out-of-favour players into contention for a place in the squad and we’ve decided to look at five names who are facing a fight to make England’s World Cup squad.

Marcus Rashford was a notable omission from the England squad for June’s Nations League games, with the Manchester United forward having endured a difficult season at club level.

Rashford carried an injury during England’s Euro 2020 campaign before undergoing surgery at the conclusion of the tournament, but failed to rediscover his form after returning at club level.

The 24-year-old made just 13 league starts and scored four goals, numbers that he will need to improve upon to force his way back into Southgate’s squad for Qatar.

The arrival of Erik ten Hag will provide a fresh slate for the forward ahead of the new season, with the attacking football of the incoming boss a brand that will appeal to Rashford, who has seen his career stagnate over the past 18 months.

Goals have been a problem for England and Rashford’s record for the Three Lions could improve his chances of selection should he start the season in promising form. He has 12 goals in 46 caps at international level, with only Harry Kane (50) and Raheem Sterling (19) having scored more among Southgate’s options.

Jesse Lingard will want his future sorted as soon as possible as he looks to break back into the England reckoning, having departed Manchester United on a free transfer this summer.

Lingard returned from a two-year international exile ahead of Euro 2020, but was omitted from the final squad for the tournament despite his impressive performances on loan at West Ham.

The 29-year-old scored nine goals in 16 league games for the Hammers, but struggled for regular first-team football upon his return to Old Trafford.

The second of two @JesseLingard strikes against Andorra in September 🎯 pic.twitter.com/SWZ23WEQ9p

He made just two league starts for the Red Devils and lost his place with England as a result, his last call-up coming in October 2021.

Newcastle, Brighton and West Ham have all been linked with signing the free agent, whose choice of club could have a major impact on his World Cup chances.

Dominic Calvert-Lewin endured a nightmare campaign of injury problems for Everton, making just 15 league starts as a result of toe and quad issues.

Having been available for around 93% of fixtures since the start of the 2017/18 campaign, it has been a difficult period for the 25-year-old who has fallen out of contention for England.

Twenty-nine league goals across the previous two seasons had seen Calvert-Lewin break into Gareth Southgate’s plans and establish himself as the chief deputy to Harry Kane, earning inclusion in the Euro 2020 squad after four goals across his first 11 caps.

The athleticism and aerial ability of Calvert-Lewin provides a different option for England, but he will need to hit the ground running to move ahead of the likes of Tammy Abraham and Ollie Watkins in Southgate’s thoughts.

Abraham in particular appears to be leading the race to make Qatar, having scored 27 goals in all competitions during a brilliant first season at Roma.

Joe Gomez has endured much misfortune when it comes to injury problems, the defender having missed much of the 2020/21 campaign after sustaining a serious knee injury whilst on international duty with England.

Gomez had been a key figure in Liverpool’s title success the previous season and had hoped to cement a place in Gareth Southgate’s side, with centre-back an area of the pitch in which a number of names have failed to truly convince.

The 25-year-old struggled to regain his place in the Reds team upon his return to fitness last season, making just four Premier League starts for the campaign as the form of Joel Matip and arrival of Ibrahima Konate pushed Gomez down to fourth-choice status at Anfield.

On this day in 2015, Liverpool signed Joe Gomez for £3.5million from Charlton…

He showed his versatility in deputising for Trent Alexander-Arnold at right-back, but faces a fight to regain his place with England as he struggles to command regular minutes at club level.

Gomez has seen the likes of Marc Guehi and Fikayo Tomori impress for their clubs to earn a chance with England and the 11-cap defender – who has been linked with signing a new deal at Liverpool despite his peripheral status last season – needs more minutes to regain the trust of Southgate.

Gareth Southgate answered questions on his decision to leave out Jadon Sancho and Marcus Rashford from England’s June fixtures, after both players struggled to find form at Manchester United last season.

“Whenever there’s a question about Man Utd it lands in their lap and becomes a bigger deal than everything else. With every player, if they’re playing well for their club then they’re going to be in our consideration, simple as that,” Southgate said, as per Sky Sports.

“There are lots of players who have the ambition of being in the squad for Qatar and it’s a challenge for all of them to look forward to.”

Jadon Sancho is putting in WORK 💪🔥

Sancho arrive at United in a £72.9m deal amid much fanfare last summer, but endured a challenging adaptation to the Premier League.

Having dazzled at Dortmund during four seasons in the Bundesliga, Sancho managed just three goals and three assists in the Premier League last season – a huge decrease in output for a player who racked up 52 goal involvements across the previous two league seasons in Germany.

Sancho has 10 G/A in 23 appearances for England at senior level and will hope to find his feet under Erik ten Hag to move back into the Three Lions’ plans.

FIFA’s announcement that squads will be expanded from 23-man travelling parties to 26 could aid his hopes of being on the plane to Qatar.