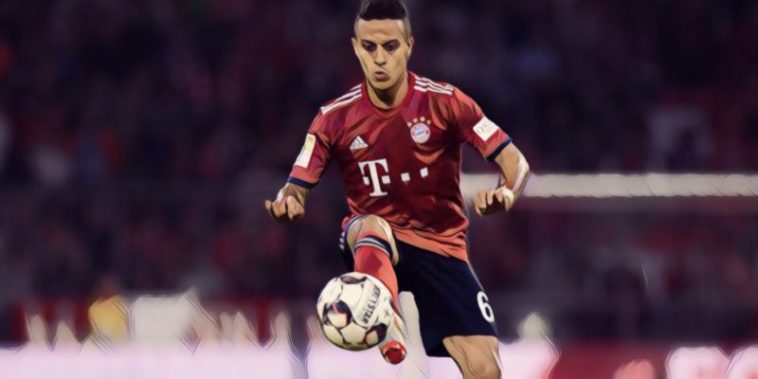 For several seasons now, the Bundesliga has staked its claim as one of world football’s finest competitions, with packed stadiums and some of the planet’s most exciting talents currently plying their trade at the top level of German football.

Premier League clubs have taken notice of the talent on offer in recent years, the likes of Pierre-Emerick Aubameyang, Leroy Sane and Naby Keita amongst the high profile players to have made the move across from the Bundesliga to the English game.

We’ve decided to profile some of the players we’d like to follow that well-trodden path in the coming years, here are five Bundesliga stars we would love to see strutting their stuff in the Premier League…

An obvious candidate for a move to the Premier League, the England international is a rumour mill favourite as a host of the division’s leading clubs monitor his development ahead of a big-money move.

Sancho has blossomed into one of the world’s brightest young talents since making the move to Borussia Dortmund two-and-a-half years ago, the exquisitely talented winger possessing the talent to become one of the game’s very best in the coming seasons.

Already a brilliant talent at just 19-years-old, Sancho has registered double figures for both goals and assists in the Bundesliga already this season, the teenager once again one of the stars behind Dortmund’s pursuit of the league title.

Manchester United, Chelsea, Liverpool and former club Manchester City are all believed to be tracking his progress alongside a collection of Europe’s elite, and it will likely take a huge bid for the German side to part with their prized asset.

Another of the Bundesliga’s brightest young things, Bayer Leverkusen midfielder Havertz is another wonderkid on the radar of the continent’s leading sides following his stand-out performances for Peter Bosz’s side.

His precocious talents were evident from a young age as he became both the club’s youngest Bundesliga player and goalscorer, and whilst his productivity has dropped somewhat this time around he remains a prospect with huge potential.

Despite being just 20-years-old, Havertz has already made over 100 appearances for the club, whilst also establishing himself as a senior German international – earning seven caps and scoring once since being handed his debut in 2018.

An elegant midfielder capable of ghosting into goalscoring positions and finishing with assuredness, Havertz has been linked with both Manchester United and Liverpool of late.

The Germany international will be a name familiar to fans of German football, Werner having enjoyed a prolific spell at RB Leipzig and currently spearheading the club’s pursuit of a maiden top-flight crown.

Currently enjoying the best form of his career, the 23-year-old has scored 20 Bundesliga goals in just 19 appearances, sitting just one goal behind Bayern Munich’s Robert Lewandowski in the race to finish as German football’s top scorer this season.

Blessed with electric pace and a cool finishing ability, Werner has also provided seven assists in all competitions this season and has the ability to play across the forward line, though it is as a central forward where he truly thrives.

Liverpool and Chelsea have strongly been linked with a player who has scored 86 goals in just 141 appearances for Leipzig since joining from Stuttgart, and despite the club’s current status as league leaders the forward may feel now is the time to move on as he bids to regularly compete for the game’s biggest honours.

Forged in the famed La Masia academy at Barcelona, Thiago would demonstrate his undoubted talents in Catalonia before showing his full potential upon a move to Munich in 2013.

The midfielder possesses sublime technique and an ability to dictate the play, his Brazilian heritage mixed with footballing lessons learnt throughout seasons spent in Spain and Germany.

Thiago’s effortless style has seen him play a role in six successive Bundesliga title successes with Bayern, adding three DFK Pokal titles to his impressive collection of silverware and being utilised in a variety of different roles at the heart of the side.

Manchester United were reportedly close to securing his services ahead of his move to Bayern, whilst links to Old Trafford have circulated in the passing years since the Premier League side’s original interest.

Few players in world football possess the class or invention that the Spain international can provide, and we for one would love the opportunity to see Thiago bring his midfield imagination to the English game.

You would have had to have been living under a footballing rock to have not noticed the impact of teenage superstar Erling Haaland this season, the Norwegian having announced himself to world football in some style following a prolific spell with Red Bull Salzburg.

The 19-year-old would score a hat-trick on his first appearance in the Champions League, before adding a further five goals in the competition to register eight in just six group stage appearances, whilst becoming the first teenager to score in five consecutive matches at Europe’s elite level.

Those goals would follow on from a barely believable 20 goals in just 15 appearances at domestic level, attracting attention from some of the continent’s leading sides, including Manchester United.

The Old Trafford side would miss out on his signature to Borussia Dortmund, Haaland wasting no time in announcing himself by coming off the substitute’s bench to score a hat-trick on his debut against Augsburg.

That treble would be followed by another goalscoring cameo in his next fixture, scoring twice more after being introduced late on to take his tally to five goals in just 56 minutes of action for his new club, with the promise of more to come.

A switch to English football may be some time off given his recent arrival at Dortmund, but the incredible goalscoring exploits of a player still in the infancy of his career make a move to England a high hope for Premier League fans.