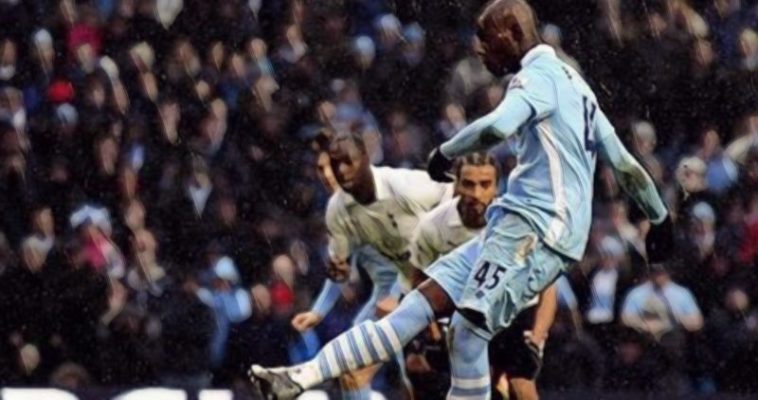 Manchester City face Tottenham in the Premier League this weekend, with both sides having high hopes of enjoying a successful season.

City got the better of Spurs in both league meetings last season, though Mauricio Pochettino’s side got their revenge after a thrilling tie in the Champions League quarter-finals.

Both sides are expected to challenge once more and Saturday’s encounter is likely to be a fiercely contested occasion. Ahead of the clash, we’ve decided to revisit some of the best games between the sides.

A thrilling encounter at Maine Road, a Tottenham side including the likes of Jurgen Klinsmann, Teddy Sheringham, and Sol Campbell were comprehensively beaten by Brian Horton’s side.

Paul Walsh opened the scoring as part of a first-half brace, the goals sandwiching a Ilie Dumitrescu penalty for Spurs and a Niall Quinn goal to give City a 3-1 lead at the interval.

Dumitrescu would get his second to pull Spurs back within one, but goals from Steve Lomas and Garry Flitcroft sealed a resounding win for City.

Spurs had raced into a 3-0 half-time lead through goals from Ledley King, Robbie Keane, and a Christian Ziege free-kick, whilst City’s hopes were further damaged after seeing Nicolas Anelka withdrawn through injury and Joey Barton sent off for two quick yellow cards on the stroke of half-time.

Few gave Man City any hope of overturning the tie but in a stirring second-half Sylvain Distin pulled one back, before Paul Bosvelt’s half-volley made things tense.

Winger Shaun Wright-Phillips incredibly brought 10-man City level with just 10 minutes remaining, and with Spurs in a stake of shock, substitute Jon Macken met Michael Tarnat’s cross in the 90th minute to win it for City and cause disbelief amongst the White Hart Lane crowd.

A huge winner takes all clash, Spurs travelled to the Etihad to face City with both sides looking to qualify for the Champions League for the very first time.

City’s billionaire takeover and new project had only just begun, whilst a Tottenham side led by Harry Redknapp had lofty ambitions of their own.

Just one point separated the sides in the Premier League table in what was the penultimate fixture of the season, and it would be Tottenham who marched into Europe’s elite cup competition following a narrow win.

A tense encounter was decided by Peter Crouch’s late header, the England forward nodding past Martin Fulop to spark wild celebrations from the travelling support.

A hugely entertaining clash at the Etihad, City kept their hopes of a first Premier League title on track with a late, late winner to defeat Spurs.

Maverick forward Mario Balotelli would be the central figure in the plot, emerging from the bench to cause chaos.

Firstly the Italian would be booked for a foul on Benoit Assou-Ekotto, before somehow avoiding being sent off after appearing to stamp on Scott Parker.

Spurs were enraged, and their sense of injustice would worsen as Balotelli fired a stoppage-time winner from the penalty spot after being fouled by Ledley King.

In a frantic start, the two sides exchanged four goals in the opening 11 minutes in a thrilling end-to-end contest.

Raheem Sterling opened the scoring for City, before a Son Heung-Min double put Spurs in control. Bernardo Silva responded for the hosts within seconds of the restart, before Sterling’s second gave City a 3-2 lead after just 21 minutes.

Sergio Aguero put City in front on aggregate for the first time just before the hour mark, before Fernando Llorente controversially bundled home Tottenham’s third to put them back ahead on away goals.

The goal seemingly struck the Spaniard’s arm in the build-up, though VAR ruled the goal stood and Spurs were heading through.

City thought they’d won it late on, Sterling scoring City’s fifth to spark jubilant celebrations, only for VAR to rule the goal out for offside in a cruel, late twist.

Spurs progressed to the last four, eventually losing to Liverpool in the final in Madrid.

Read Also: The stat that shows Spurs have always been more resilient than you think