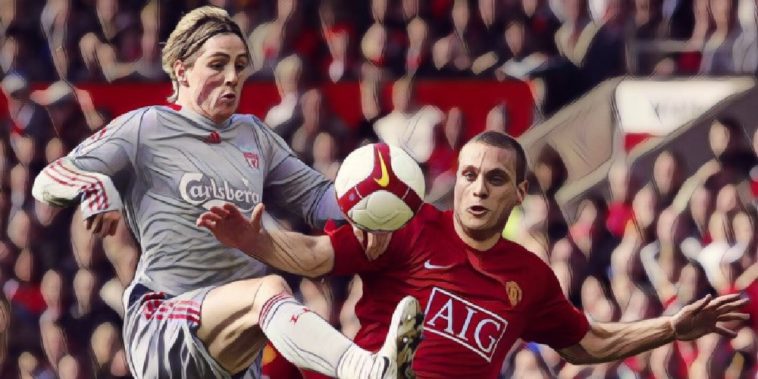 Rio Ferdinand has opened up on his ‘relationship’ with Nemanja Vidic at Manchester United and why he believes the defender struggled against Fernando Torres.

Ferdinand and Vidic established themselves as two of the division’s greatest centre-backs during glittering careers at Manchester United, winning five league titles and the Champions League together under the guidance of Sir Alex Ferguson.

Despite forming one of the most dominant defensive partnership’s in Premier League history, Vidic notably struggled on occasion against former Liverpool forward Torres, the Serbian being sent off on three occasions against the club’s Merseyside rivals.

Ferdinand has opened up on Vidic’s problems when facing the Spanish star, and believes Torres’ style was ill-suited to the robust nature of the defender’s game – while naming Kevin Davies as the striker who he struggled against most.

“First of all, it’s the best partnership ever in Premier League history, trust me,” Ferdinand told The Beautiful Game podcast.

“Listen, strikers were playing out on the wings some times because they didn’t want to come up against us, it was mad!

“There’s always going to be that one player in your career who’s difficult. He might not be the best player on the planet, but his style is made to hurt your style. And Torres might have just been that for Nemanja.

“He’s someone he found difficult to play against. And he’s probably the only player I’ve seen consistently give Vida a hard time, and he got sent off in a couple of the games didn’t he, early on in the games.

“But listen, Torres was a great player and when he was in his pomp when he was at Liverpool, he was one of the best strikers about. He was a devastating striker.

“But with me one-v-one, he didn’t cause me any problems if I’m honest. That’s just the way it is.

“One of my hardest strikers to play against when people ask me – other than the ones that are obvious, like Ronaldo and Messi – was Kevin Davies. You would never expect that.

“But he was always tough to play against for me, always caused me the most problems. He always was physical, just obstructing you all the time.

“The ball might be over there [away from you] but he’s grabbing you and all this stuff. So you would never expect that, but Torres would have been that for Nemanja probably. But we never really spoke about it.

“It’s mad, our relationship, we spent a lot of time with each other after training, in and around the training ground just chatting about loads of stuff, but it wasn’t about our relationship on the pitch.

“It wasn’t like, ‘Vida you know when you go tight with Suarez, I’m going to be behind covering’. It was nothing like that. We never spoke like that at all.

“But our relationship was like there was something in the air that I knew he was going to go there, and if he went there I would go here. If I went here, he was there.

“Partnerships in the game are not necessarily built just on the training pitch, sometimes you’re just blessed that someone comes into your life at that time and it’s come together just like that. And that’s what we had.”