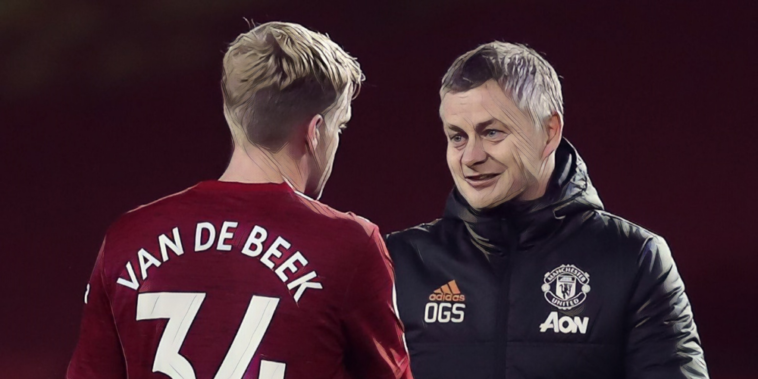 Rio Ferdinand admits he is shocked by Manchester United’s underuse of Donny van de Beek and believes the summer signing ‘would add value’ to Ole Gunnar Solskjaer’s side.

Van de Beek has endured a disappointing debut season with the Red Devils after signing from Ajax in a deal worth up to £40m last summer, starting just two Premier League fixtures following his high-profile switch from the Eredivisie.

The midfielder was substituted after being handed a rare starting opportunity at the weekend, failing to make an impression during the club’s 3-1 FA Cup quarter-final exit to Leicester.

Recent reports have indicated that the 23-year-old is now already considering an exit, whilst 90min report that the midfielder could be used as a makeweight in potential summer transfers with the club interested in Borussia Dortmund trio Erling Haaland, Jadon Sancho and Manuel Akanji.

Ferdinand has now discussed the Netherlands international’s situation and admits he has been surprised by Van de Beek’s last of first-team football, insisting the midfielder could ‘add value’ to the side with his ability to ghost forward into goalscoring positions.

“He’s someone who would create goals, he played a part in the goal [vs Leicester]. When he gets in the box, he knows how to put the ball in the back of the net.

“But to get in the box, he’s got to play in the position where Bruno Fernandes is playing and he’s not going to do that.

We are all hurting. We will come back stronger. 💪🔴 pic.twitter.com/hZbnJ50At9

“Can he do it from No. 8 position or No. 6 when he’s holding? I think he can. He’s intelligent enough. Ajax players are brought up to be intelligent footballers, they are able to play multiple positions, he can do that.

“It’s just obviously United want a stiffer central midfield area behind Bruno. I get that, given that’s got to be protecting the centre-backs and that’s not going to be one of Van de Beek’s strengths. But then it begs the question: why buy him then?”

Ferdinand expressed his sympathy for Van de Beek following a frustrating campaign in the Premier League this season, insisting his lack of opportunities would not have been expected following his summer signing from Ajax.

The former England international believes it has been difficult for the star to make an impression given his limited involvement and says the Dutchman has not been provided a chance to make a significant contribution.

“This isn’t what he was sold,” said Ferdinand. “I feel for him in that. Has he done enough when he’s been given an opportunity? I think it’s been difficult.

“I don’t think he’s been helped in terms of team selection and opportunities so I don’t think it’s fair to say he’s underperforming because he’s not been put in a position to perform yet on a consistent basis.

“I really do feel for him but it would be interesting to hear what he was sold and told on the way in because the lack of opportunities, I don’t think he’d have come here if he’d known that.”