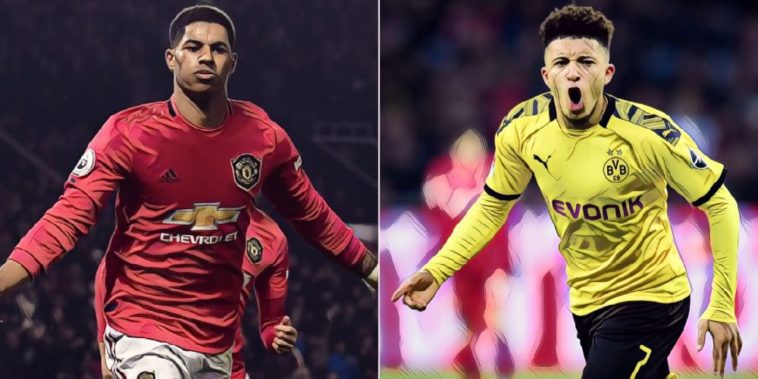 Rio Ferdinand has spoken on Manchester United’s reported interest in Jadon Sancho and believes the club would have a ‘mouthwatering’ front six with the addition of the Borussia Dortmund star.

The England international has been strongly linked with a move to Old Trafford following another stand-out season in the Bundesliga, with reports suggesting the 20-year-old could be set for a British transfer record move to the Premier League this summer.

Ferdinand has now opened up on the proposition of Sancho joining Manchester United this summer, and believes the club would possess a ‘ridiculous’ amount of ability should the winger join the likes of Bruno Fernandes and Paul Pogba in Ole Gunnar Solskjaer’s side.

Speaking on the FIVE YouTube channel, Ferdinand said: “If I was looking at the team now and you have McTominay with Bruno [Fernandes] on one side of the three and Pogba on the other…Rashford upfront, Martial on the left, James or Sancho if they buy him on the right.

“You can’t tell me other midfielders aren’t going to be thinking, ‘if these lot are on fire today we’re going to have to be on a game, it’s going to be a hard day work for us’.

“There’s ability there, it’s ridiculous. If they can find that cohesion, the team set-up for them to flourish, it’s mouthwatering what could happen.”

The future of Pogba, however, remains a constant source of speculation with the midfielder having previously expressed a desire to leave the club in search of a new challenge.

Real Madrid and Juventus have been linked with a big-money move for the France international, and Ferdinand admits the long term future of the 27-year-old remains in doubt.

“We need Paul Pogba fit, we need him in that team and to see what he’s like to see if the relationship can be built with the players and the players Ole is acquiring now.

“It’s up to Paul Pogba. Ole Gunnar Solskjaer and the powers that be at the club whether Paul Pogba stays at the football club then we see.”