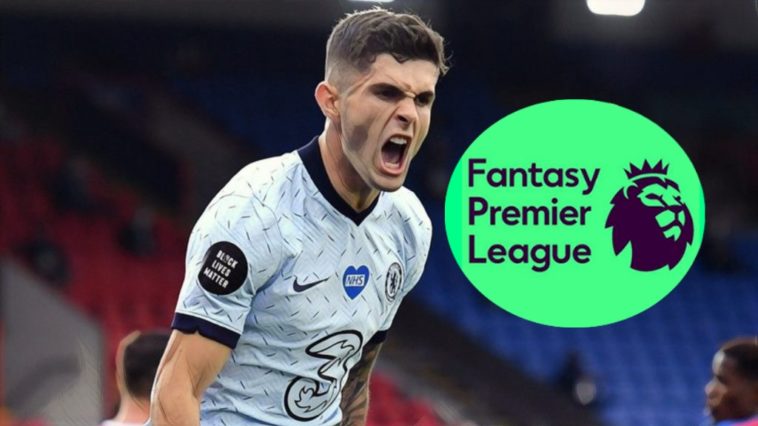 When playing Fantasy Premier League it’s imperative to have the marquee players guaranteed to get you points – your Mo Salahs, Kevin De Bruynes and Pierre-Emerick Aubameyangs of this world.

But everyone is on the lookout for the next line of superstars they can add to their team to get ahead of the crowd. Who’s going to be the guy who guarantees a haul almost every week? We think these five players are going be – dare we say it? – essential in the near future…

Make sure to check out Fantasy Football Hub for all your FPL needs. They are currently offering a pre-season discount on membership that you can avail of before the 2020/21 campaign kicks off.

Five Fantasy Premier League players who will explode in 2020/21:

Injury curtailed his first campaign with Chelsea early on, but Captain America nonetheless showed how lethal he could be for his new club, scoring nine goals and making eight assists for the Blues last season.

Some memorable moments included Pulisic’s stunning hat-trick against Burnley in October and his incredible performance against Liverpool, where he slalomed his way to making one of the best assists of the season before scoring himself against the champions.

There are quite a few Chelsea players we could have plumped for here, but Pulisic is set to be a key cog in Frank Lampard’s relentless and star-studded attack. Should he stay fully fit, he will make massive returns this season.

Prediction: 15 goals and and a hatful of assists.

The long-running debate over whether Anthony Martial is overrated or underrated could finally be settled this season. The Frenchman has never quite put the doubters to rest, mixing moments of magic with periods of indifferent form, but this has to be the year he finally unlocks his true potential.

The previous campaign was his best yet, providing a highly creditable 17 goals and nine assists in the Premier League. It was also his best FPL wise, scoring 200 points for the first time ever.

Alongside Marcus Rashford and Mason Greenwood, Martial found himself at the centre of a Manchester United forward line that discovered its rhythm following the signing of creative force Bruno Fernandes in January. At last, he was the focal point instead of being herded out to the wings and he thrived.

In 2020/21 we should see him do even better. If not, perhaps the doubters were right all along.

Expert’s View: How to build the ideal FPL squad

At long last, the prophecy is fulfilling itself and Phil Foden will make his much anticipated breakthrough as a regular in Manchester City’s first team. Well, so long as he doesn’t continue to break coronavirus protocols by inviting women back to his hotel room.

In all seriousness, the prodigious youngster finally began to come good on his promising potential following the restart of last season’s campaign. In the nine appearances he made during Project Restart, he took 24 shots, had 3.07 expected goals (xG), and scored five goals.

With David Silva’s long and glorious tenure at the club now at an end, there is a clear pathway for Foden to stake a claim in Pep Guardiola’s starting lineup. The U17 World Cup winner has bags of technical ability, an eye for goal and is often positioned very high up the pitch – a dynamite combination for an FPL asset.

A highly anticipated move to Arsenal was something of an anticlimax last season, as Kieran Tierney battled injury before eventually finding a place in Mikel Arteta’s side.

The full-back could hardly have chosen a more chaotic time to move to the north London outfit, given all the drama surrounding Unai Emery, Granit Xhaka and Mesut Özil on top of the coronavirus pandemic.

But the former Celtic man should be far more settled this year and, provided he stays fit, will play more than the 986 minutes he got under his belt last season. We wouldn’t be overly confident of any Arsenal player raking in the points from clean sheets, but Tierney is a dangerous threat going forward and should find himself with a lot more than the one goal and two assists he provided in 2019/20.

After a successful loan stint at West Brom in 2018, Harvey Barnes emerged as one of the most promising young talents in the Premier League. Last season he established himself as a key player for Leicester City, playing 36 times for the Foxes.

In 2090 minutes the left winger scored six goals and made ten assists, while his 2.63 shots and 1.51 attempted assists per 90 minutes are very encouraging for a young, wide player. With Ricardo Pereira and James Maddison not yet back to full fitness, the burden rests on him to fill the considerable gap left by their absences.

Brendan Rodgers could very well give him more responsibility in that regard, which would see not just his playing time increase, but his end product too.

This article refers to FPL goals and assists as opposed to actual goal and assist data tallied by Opta.

Ahead of the start of the new campaign we’ve teamed up with Fantasy Football Hub, who are offering an exclusive discount for new members who are looking to dominate their mates in FPL this season.