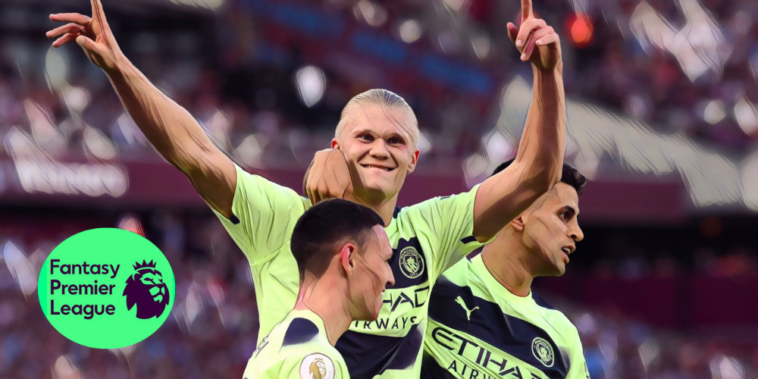 Gameweek two includes a capital cracker as Antonio Conte takes Tottenham to former side Chelsea, while Bournemouth – fresh from an opening weekend win on their Premier League return – face a major test with a trip to the champions.

Elsewhere Erik ten Hag will hope to get his Manchester United reign up and running after a false start and Liverpool will want to avoid losing further ground on the early pacesetters.

Ahead of gameweek two, we look at four of the best Fantasy Premier League captaincy options.

FPL managers who urged on the side of caution with Erling Haaland looked somewhat foolish after gameweek one, as the Manchester City forward made a mockery of suggestions that he might need time to adapt to the Premier League.

Haaland hauled 13 points after a brilliant brace at West Ham, while the confidence he showed to take – and convert – a penalty indicating he might also be hard to shake off spot-kick duties.

The Norwegian’s performance has seen FPL managers flock to bring him in ahead of gameweek two and he looks a firm favourite to be the most selected captain of the weekend fixtures.

Haaland had four big chances against West Ham and will be confident of more as Bournemouth visit the Etihad. The Cherries began with a win last weekend, but have lost their last 11 fixtures against City in all competitions. The last time Bournemouth earned a result against this weekend’s opponents, both teams were languishing in the third tier of English football.

Kevin De Bruyne offers a fine alternative to his new teammate, with the Belgium midfielder up and running for the season with an assist in gameweek one.

The Scout has the Belgian as one to watch for GW2 👉 https://t.co/XUB9LWmJNw#FPL pic.twitter.com/FqhKKtMcSi

The 31-year-old averaged a goal involvement every 95 minutes for City in the Premier League last season and was in impressive form across the club’s pre-season campaign.

With Haaland leading the line and stretching defences, there could be even more room for the brilliant Belgian to wreak havoc. Due to the popularity of Haaland and Mohamed Salah he is owned by just 16% of FPL managers at the time of writing, making him a differential option.

The most reliable asset in FPL delivered once again in gameweek one, hauling 12 points after a goal and assist in Liverpool’s 2-2 draw at Fulham.

While both Liverpool and Salah were below their best, the Egyptian remains a production machine when it comes to making and taking goalscoring chances.

His goal was the sixth consecutive season in which Salah has scored on the opening weekend, extending his own Premier League record.

Salah also boasts a brilliant record against this weekend’s opponents, having been directly involved in 13 goals across his last seven appearances against Crystal Palace. He has blanked just once against Palace during his Liverpool career, during a 1-0 win at Anfield in August 2017.

Jarrod Bowen vs Nottingham Forest (A)

West Ham struggled to contain Manchester City last weekend, with Jarrod Bowen unable to replicate his two-goal performance against the champions at the back end of last season.

Both Bowen and the Hammers will hope for improvement in gameweek two and a trip to Nottingham Forest could bring the best from the England winger.

Forest were given a rude awakening in their first top-flight game in 23 years last weekend, conceding a league-high nine shots on target as Newcastle dominated their clash at St James’ Park.

Bowen was one of just three players – alongside Mohamed Salah and Mason Mount – to reach double figures for goals and assists in 2021/22. He was also particularly fruitful on the road when it came to creating goals with seven of his 11 assists coming in away games.