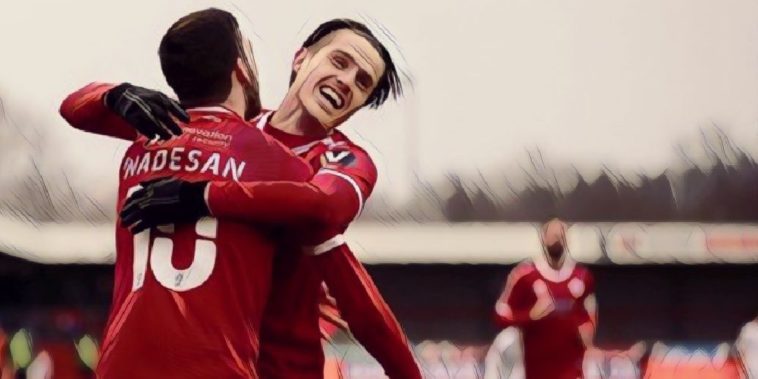 It’s always amongst the most intriguing weekends on the football calendar, the FA Cup’s third round failed to disappointment once again with fourth-tier Crawley’s giant-killing of Leeds the headline result.

Marine FC’s fairytale run to the third round ultimately ended despite a spirited display against Premier League giants Tottenham, though Chorley ensured there will still be non-league representation in tonight’s draw after defeating a depleted Derby side.

Following the third round action we’ve picked out some of the weekend’s star performers, here is The Football Faithful’s FA Cup Team of the Week:

Blackpool upset the odds to secure a memorable cup upset after eliminating Premier League opposition in the form of West Brom West Brom, the League One side heading into the fourth round after a penalty shoot-out success at Bloomfield Road.

Having seen goalkeeper Chris Maxwell miss two recent league fixtures after testing positive for Covid-19, Blackpool were delighted to welcome the 30-year-old back into the fold with the shot-stopper enjoying an afternoon to remember.

Not bad from a keeper who was in a bad way with Covid over Christmas!#FACup #bbcfacup pic.twitter.com/VUCLwvuIfl

Maxwell impressed throughout the 120 minutes that ended 2-2 – including making a superb save in extra-time – before making himself a hero in the shoot-out, keeping out the efforts of Kyle Edwards, Darnell Furlong and Matheus Pereira to book Neil Critchley’s side a place in round four.

Jason Steele – who saved FOUR penalties as Brighton edged Newport County – also deserves a mention for his own shoot-out heroics.

Huddersfield’s second-string side were dumped out by lower league opposition as Plymouth twice came from behind to earn a shock victory at the John Smith’s Stadium, securing a 3-2 victory against a side one division and 26 places above them in the footballing pyramid.

It was Plymouth captain Joe Edwards who scored his side’s deserved winner following a forward burst into the box to convert from close range, the wing-back now Argyle’s joint-second leading scorer this season.

Edward’s decisive contribution booked Ryan Lowe’s side their place in the fourth round for the fourth time since 2008 and the League One outfit will no doubt be hoping for a glamour tie in tonight’s draw.

A ‘significant’ outbreak of coronavirus forced Aston Villa’s hand for their third-round tie against Premier League champions Liverpool, a side comprised entirely of youth players picked to face the likes of Mohamed Salah and Sadio Mane.

Dean Smith – watching from home amid coronavirus protocols – will no doubt have been pleased with the performance of Villa’s youngsters, who more than matched the Reds over the opening 45 minutes and snatched a shock equaliser to head into the interval at 1-1.

Teenager Louie Barry will grab the headlines after scoring his first professional goal, but it was centre-back Dominic Revan – captaining the youthful side – who led the way, throwing his body on the line as an inexperienced Villa repelled several visiting attacks.

Liverpool’s experience and quality ultimately shone through to run out 4-1 winners as they scored three quickfire goals, but Villa’s starlets can no doubt be proud of an encouraging display.

Crawley produced the result of the round and one of the biggest ‘cupsets’ for a number seasons after thrashing Leeds 3-0 on Sunday, the fourth-tier side rising to the occasion in some style to eliminate their top-flight opposition.

Leeds have won plenty of plaudits this season for their attacking style but they struggled to find a way through John Yems’ side, with centre-back Jordan Tunnicliffe dominant in the air at the heart of the Crawley defence.

The 27-year-old battled valiantly to help his side to a clean sheet and capped a performance to savour with his side’s third goal, confidently blasting home from close range after another set-piece unsettled the visitors.

The FA Cup’s third round saw some sensational goals but there were fewer better than James Justin’s wonder goal for Leicester at Stoke, the ever-improving full-back producing a moment of magic as the Foxes eased into the next round.

Justin has proven a bargain buy for Brendan Rodgers and has impressed hugely during the current campaign, his increasing confidence showcased by this brilliant goal to open the scoring.

The 22-year-old beat two opposition defenders before curling home a fabulous finish to open the scoring, with Rodgers having backed the young defender for an England call-up.

Leicester are into the fourth round draw and will no doubt be eyeing the FA Cup as a realistic avenue to silverware this season.

The circumstances undoubtedly favoured non-league Chorley as they took on a weakened Derby side, capitalising on a Covid-19 outbreak at the Championship outfit to put an inexperienced side to the sword.

Chorley’s seniority made the difference against a side without a single minute of previous first-team experience as they secured a 2-0 victory, with Mike Calveley amongst his side’s star performers and scorer of their second goal, meeting Elliot Newby’s cross to put the tie beyond doubt.

Here we go, then – @Adele 🙌 pic.twitter.com/jPhuIvu6dZ

Calveley had four shots and won a huge 15 aerial duels as Chorley made their size advantage count, the club continuing the best cup run in their 138-year history after securing a place in the fourth round.

Chorley are now the first fifth-tier side in 13 years to reach this stage and are just one win from becoming only the 10th non-league side to reach the FA Cup’s fifth round.

Bernardo Silva has not quite looked the same player since starring during Manchester City‘s domestic treble-winning season in 2018/19, but the Portuguese playmaker provided a reminder of his undoubted quality with two goals against Birmingham this weekend.

Pep Guardiola’s side breezed into the fourth round after running riot in the opening 45 minutes at the Etihad, securing a comprehensive 3-0 victory.

Silva opened the scoring with an outstanding strike of flawless technique and perfect precision, slamming home a wonderful half-volley to open the scoring for the dominant hosts.

What a finish from Bernardo!! 😍#MCFC | @EmiratesFACup pic.twitter.com/40EBhYCU3B

The 26-year-old was influential throughout and turned home a second from close range to double City’s advantage, and Guardiola will hope his showing can increase confidence as Silva bids to return to the superb standards he set two seasons ago.

Manchester City enjoyed themselves in the first half of a routine victory over Birmingham, with Riyad Mahrez close to his sparkling best during a dominant opening 45 minutes for the Premier League side.

The Algerian continually picked up possession to make things happen for his side, opening up gaps in the opposition’s backline with clever passes and signature dribbles into central positions.

Mahrez’s pass in the build-up to Bernardo Silva’s second goal was exquisite, a perfect outside-of-the-boot ball into the path of Kevin De Bruyne and a demonstration of what the winger is capable of when truly in the mood.

For those who question whether the FA Cup retains its magic, look no further than Nick Tsaroulla whose emotional post-match interview was one of the feel-good stories of the third round.

The 21-year-old was released by the academy system at Tottenham after struggling to recover from injuries sustained in a car crash in 2017, before failing to make the grade once more after a brief spell in Brentford’s B side.

Handed another opportunity at Crawley, the youngster fulfilled a boyhood dream by starring during a memorable FA Cup triumph for his side, opening the scoring in the club’s giant-killing of Leeds with his first professional goal.

What a moment. Nick Tsaroulla scores his first goal in senior football. Back in 2017, during his time in Spurs’ academy, Nick was involved in a car crash and missed a year of football before eventually being released. He has certainly comeback fighting 🙌pic.twitter.com/wEULwtsl6w

It was a brilliant effort as Tsaroulla twisted and turned away from a succession of challenges before firing low across the goalkeeper, the player reaping the rewards of his perseverance during a testing journey in the game.

Granted, the opposition were of a vastly inferior standard, but Carlo Vinicius did exactly what was expected, stand-in for Harry Kane and score the goals to secure a Tottenham victory.

The Brazilian netted twice from close-range as the north London side overcame their eighth-tier opposition in routine fashion, before completing a first-half hat-trick with a brilliant lobbed finish to claim the match ball.

He could – and perhaps should – have had more, but Jose Mourinho will no doubt be pleased with the frontman’s display with Vinicius showing he can provide Spurs with a focal point and attacking threat in the absence of the talismanic Kane.

It’s now six goals in nine appearances in all competitions for the on-loan Benfica star, who will be hoping for further involvement over the second-half of the season.

The third Crawley star to feature in our XI and arguably their most impressive performer on a historic day, Ashley Nadeson proved a thorn in the Leeds side throughout the upset of the round.

Nadeson’s pace and power troubled the Premier League side and he got his reward for a tireless display with Crawley’s second goal, bursting forward before firing in at the near post to double the underdog’s advantage.

Ashley Nadesan for Crawley vs. Leeds:

A goal, an assist and a great display. pic.twitter.com/ujAEIycR73

The 26-year-old was playing in the ninth tier of the football pyramid just five years ago before tormenting Leeds this weekend, a remarkable rise for a player who will be eyeing another shot at one of England’s biggest clubs in the fourth round.