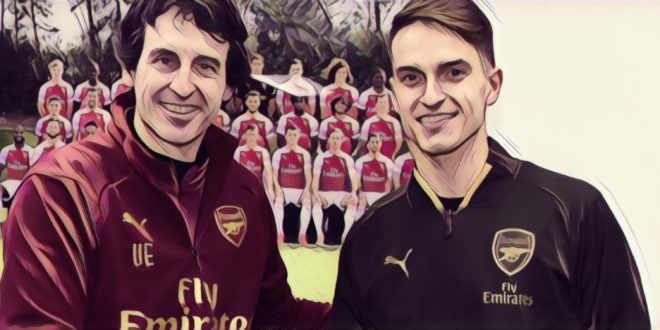 Rating every signing Arsenal made under Unai Emery

Unai Emery’s stint as Arsenal manager came to an end in November 2019, just under 18 months after it began.

The man chosen to replace legendary coach Arsene Wenger was far from a qualified success, but he did oversee a large scale change in the playing personnel.

Formerly influential players such as Petr Cech, Aaron Ramsey, Danny Welbeck, Alex Iwobi and Jack Wilshere all left during his tenure, while a new generation of talent was ushered in. While this strategy didn’t work out for Emery himself, his successor Mikel Arteta may benefit from some of the younger players brought in.

Here’s our ratings of the 12 players to join Arsenal since Emery was appointed head coach in the summer of 2018.

The first and definitely one of the worst signings of the Emery era, Lichtsteiner arrived on a free transfer from Juventus and was supposed to bring experience to the Arsenal squad, but looked to simply no longer have the legs to play at the top level.

Particularly poor performances away at Liverpool and Manchester City stand out, but truly Lichtsteiner was never the sort of player Arsenal should have been looking at.

Some of the criticism sent his way was unfair because of Emery’s ability to expose the weaknesses of his players, but this signing can go down as nothing more than a bust. He gets a two, rather than a one because of his work rate.

In an era where Harry Maguire is the world’s most expensive defender, Leno is a decent example of reasonable value in the transfer market. Brought in from Bayer Leverkusen for £22.5m last summer, Leno was already a German international and a well-proven Bundesliga campaigner with more than 300 senior appearances.

Within a few weeks he displaced Petr Cech in goal and has performed well enough since. He made a number of errors last season but has been far more consistent this term, barring one shocking attempt to collect a cross against Chelsea. Makes a lot of saves but also faces a lot of shots it must be said.

A £7m signing from Lorient in Ligue 2, Guendouzi is an exciting if unpolished talent. For a 20-year-old to already have 60 senior appearances at a club like Arsenal is a sign of his ability, and he became a crucial player under Emery.

His starts have decreased under Arteta, understandably given that he was probably overplayed previously, and he needs to learn more discipline and structure if his to be a regular in the Spaniard’s side. Rating him is difficult because on current output he is a six, but he has the potential to go much higher.

Torreira was said to be the second coming of Gilberto Silva when he first arrived from Sampdoria, but a clear misunderstanding by Emery about how he should be best utilised nearly forced him towards the exit door.

Costing Arsenal around £26m in the summer of 2018, expectations on the Uruguayan were high after an impressive showing for his country at the World Cup in Russia,  but following a bright start last term his form began to dip significantly as his maiden campaign in north London wore on.

Luckily for Arsenal and Torreira though, Arteta looks like he better understands how to get the best out of him and his performances have instantly improved. In the new Arsenal system, he looks like a crucial component and a player that could play an important role under Arteta.

Sokratis was already past his best when he arrived for £17.6m from Borussia Dortmund last summer, but barring a few dodgy performances at the start of this year, he hasn’t been a Shkodran Mustafi level disaster.

Going forward he will need to be replaced because he is lacking in quality on the ball and is also the wrong side of 30, but for now he remains a key part of Arsenal’s back four.

Not Arsenal’s worst signing at centre-back, but that isn’t saying much.

The signing of Denis Suarez was a disaster in many ways for Arsenal. Not only did the one-time Spain international manage just six appearances for the Gunners because of injury, but his arrival also opened a rift between the club and former head of recruitment Sven Mislintat.

Mislintat insisted that Arsenal should lean on their youth setup, rather than bringing in Suarez, with the former Borussia Dortmund scout arguing Bukayo Saka and Joe Willock should be offered more game time instead. As it happened, the club decided to move for Suarez on Emery’s recommendation and Mislintat’s departure was confirmed just a few weeks later. With Suarez barely featuring the Gunners failed to qualify for the Champions League and Emery was fired within three months of the start of the new season.

A player yet to make an appearance in an Arsenal shirt, 18-year-old Saliba is dubbed as one for the future. The young Frenchman was purchased for around £27m this summer before being instantly loaned back to his former club Saint-Etienne, and based on what we have seen and read about him, he is a player capable of improving the Gunners’ defence next season.

Perhaps this expectation is a little steep for such a young player who has repeatedly struggled with injuries this season, but he is certainly someone to keep an eye on.

A complete unknown to most fans and pundits, Martinelli’s form has been a real surprise. Aged just 18, Arsenal purchased him for around £5m from Brazilian fourth tier side Ituano, and he has already impressed with eight Arsenal goals to his name.

The young forward will likely get some opportunities in the Premier League over the coming weeks with Pierre-Emerick Aubameyang suspended and it will be interesting to see what becomes his best position. One thing is clear though the young attacker is lethal when presented with a chance in front of goal and looks to have a big future ahead of him.

Pepe may not have hit the ground running in English football, but some of the moments the former Lille man has already produced in an Arsenal shirt mean it is not hard to notice his potential.

Playing under Emery clearly didn’t suit him and he has improved under Arteta since his arrival in December. Finding his best role is still a puzzle for Arteta to work out, though fans and pundits will have little patience given that the Gunners spent £72m on him this summer.

Unfortunate to get injured when he did, Ceballos is a talented player that could excel under Arteta. The Spaniard should get a run of games before the end of the season because he certainly possesses a skill set that the current Arsenal midfield is missing, although reports suggest he is unhappy at the Emirates.

Furthermore, under Emery, he often looked poor and under-powered and given the fact he is on a season-long loan from Real Madrid, he may never get to show his true potential at the Emirates.

A summer signing from Celtic for a reported £25m, Tierney has had his season blighted by injury. However, in his few appearances he has looked a good player and clearly an upgrade on Sead Kolasinac

Going forward, the Scottish international needs to focus on getting fit and staying that way, especially with Arsenal said to be interested in Paris Saint-Germain left-back Layvin Kurzawa. Unfortunately for him, Tierney is a player that Arsenal won’t see the best of until next season, but he remains an exciting prospect to watch out for.

Almost impossible to rate because of the polarizing nature of his performances since his arrival from Chelsea in the summer. Under Emery, he was a two, but under Arteta he is close to an eight.

Nonetheless, at 32 years of age, the erratic Brazilian is getting on a bit and it remains to be seen if Arteta views him as part of his long-term plans. However, having him around could really help the development of Saliba and Rob Holding, while for the time being he is a crucial part of a weak central defence.