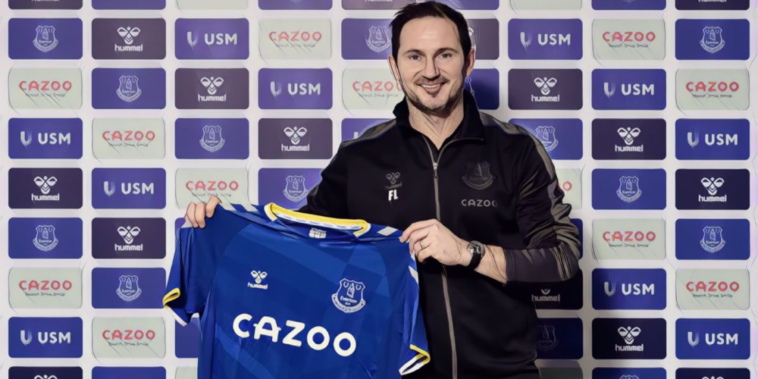 Everton have confirmed the appointment of Frank Lampard as the club’s new manager, signing a two-and-a-half year contract at Goodison Park.

Lampard has been named as Everton’s new manager and will take charge of the Toffees for the first time when the club face Brentford in the FA Cup’s fourth round on Saturday.

The 43-year-old returns to Premier League management for the first time since leaving Chelsea in January 2022 and was chosen ahead of fellow candidates Vitor Pereira and Duncan Ferguson for the role.

Lampard has described his appointment as a huge honour and told the club’s website that he is ‘hungry’ to get started as he looks to move the struggling side away from the Premier League’s relegation places.

“It is a huge honour for me to represent and manage a club the size and tradition of Everton Football Club,” Lampard said.

“I’m very hungry to get started. After speaking to the owner, Chairman and the Board, I very much felt their passion and ambition. I hope they felt my ambition and how hard I want to work to bring it together.

“You can feel the passion Everton fans have for their club. That will be hugely important. As a team – the competitive level that the Premier League brings and the position we are in the table – we certainly need that. It’s a two-way thing. I think Everton is a unique club in that you can really understand what the fans want to see. The first thing they want is fight and desire and that must always be our baseline.

“My first message to the players will be that we have to do this together. We’ll try to do our job and I know the fans will be there backing us.”

Lampard arrives with Everton 16th in the Premier League, just four points above the relegation places following a disappointing start to the season under Rafael Benitez.

His first signing could be the loan arrival of Donny van de Beek from Manchester United with the midfielder finalising a move from Old Trafford in the final hours of the transfer window.

Lampard’s backroom staff will include Joe Edwards, Paul Clement and Chris Jones, whilst Duncan Ferguson and Alan Kelly will remain in their positions at Everton.