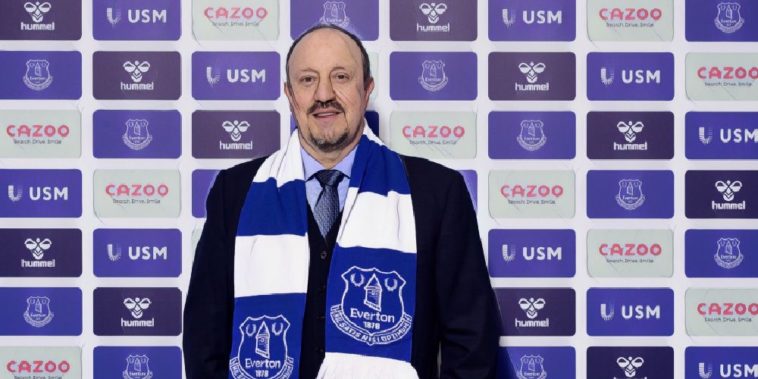 Everton have announced the appointment of Rafael Benitez as their new manager, with the former Liverpool boss signing a three-year contract at Goodison Park.

Everton had been linked with a number of candidates following Carlo Ancelotti’s decision to leave the club and return to Real Madrid, with Benitez having emerged as a shock front runner in recent weeks.

The decision is set to divide fanbases on both sides of Merseyside with Benitez having previously spent six seasons in charge of Liverpool, remaining a popular figure with the Reds after winning the Champions League and FA Cup during his time at Anfield.

Reports earlier this month had suggested that the Everton board had decided against appointing the Spaniard following initial discussions, with the news having been greeted with an angry backlash from the Toffees support who made their feelings clear with anti-Benitez banners outside the club’s stadium.

Meanwhile, a threatening banner reading “we know where you live, don’t sign” has also been placed near Benitez’s Merseyside home in recent days, prompting an investigation from police.

Everton owner Farhad Moshiri has however decided to go against a section of the fanbase and appoint Benitez as the club seek a fifth permanent manager in as many years, having also considered moves for former Wolves boss Nuno Espirito Santo and West Ham manager David Moyes.

Benitez returns to Merseyside 11 years after leaving Liverpool and has since had spells at some of Europe’s leading clubs, taking charge at Inter Milan, Chelsea, Napoli, Real Madrid, Newcastle and Chinese Super League side Dalian Professional.

Speaking on his appointment, the Spaniard said he believes Everton can ‘compete against anyone’ and says he was attracted by the ‘passion of the people behind the club’.

“You can see the ambition is there. This club is growing,” Benitez told evertontv.

“For me, it is about bringing the winning mentality, being competitive, so everything is in place on the pitch and off the pitch.

“I love the passion of the people behind the Club. I know the city, I know Scousers, I know what it means for every fan here to compete and to have the chance to win. To come to Everton is something that means a lot, for sure.

Benitez to #EFC is confirmed. pic.twitter.com/sbrQop9dSh

“You can see the ambition of the owner, of the Board, everybody wants to be better and to go to the new stadium with a massive boost.

“I like to compete. I like to win. I came from the academy at Real Madrid [as a young player and coach], and the winning mentality is already there.

“We [myself and my coaching staff] have won 13 titles because we have this mentality and I still want to win.

“And I have come to Everton because I liked the idea to be competitive again – and to have the chance to compete in every game, to compete against anyone.”

Benitez also discussed the importance of the fans’ backing in making Goodison Park a fortress again, with Everton having struggled for consistent home form in 2020/21.

The 61-year-old is hopeful the supporters get behind the team despite some sections having been against his appointment, outlining his determination to be a success on the blue half of Merseyside.

“I will try to do that with my experience, and the knowledge of the city, the fans and the Premier League.

“If you have very good players, it is about managing them. If you have to improve your players, you have to do that and at the same time bring some additions that will give the team more quality – but also the right mentality.

“You want players with the right character, so you can be sure everybody has the same idea to go onto the pitch to give everything. That is what the fans are expecting. We need the fans behind the team and I think they will be.”

Benitez spoke on his previous spell in charge of Liverpool and says he has given his all to each of his former clubs, though says he has arrived at Everton to ‘fight’ for the club and will do his utmost to bring success to Goodison Park.

“Every single club I was there, I was fighting for them. If you analyse things in the context, what you are expecting from your manager is to fight for your club, and I will do that.

“I am here, I will fight for my club, I will try to win every single game, and it doesn’t matter who the opponents are, or the rivals. It is something you have to do, it is your nature, that you have to try to do your best.

“And why a lot of fans in a lot of these cities love me is because I was giving everything for them. If you analyse this in the context, then it is very clear I will do the same for Everton.”

2 – Rafael Benítez will be only the second manager ever to take charge of both Everton and Liverpool in the two clubs' histories, after William Edward Barclay, who was Everton's first manager in 1888 and Liverpool's in 1892. Crossing. pic.twitter.com/YrlRG13IXt

Benitez also confirmed that Duncan Ferguson will be staying at the club as part of his backroom staff, reiterating his belief that the Everton legend can be ‘fundamental’ to the new regime.

“I think Duncan will be fundamental for us,” Benitez said. “He knows the Club, the knows the fans, he knows the mentality.

Benitez will begin his reign at home to Southampton on the Premier League’s opening weekend, whilst the first Merseyside Derby of the season is scheduled for November 30 at Goodison Park.