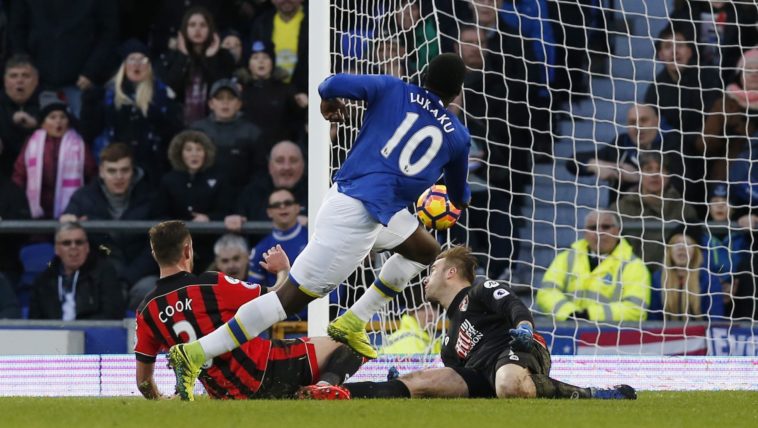 Everton and Bournemouth played out a nine goal thriller with Romelu Lukaku striking four as the Blues grabbed the three points. What a game it was. Everton once again showing why Ronald Koeman was the right man to replace Roberto Martinez and give the club something to aim for again.

After a hard earned draw with Stoke midweek it seemed that a win against Bournemouth was the only option. With Ademola Lookman making his first start for Everton since signing in January and Morgan Schneiderlin starting consecutive games for the first time this season hopes were high for Evertonians going into the game and it didn’t take long for Everton to deliver.

Only 31 seconds into the game Romelu Lukaku scored an absolutely amazing goal. The joint fastest goal in the league this season, to give the fans an idea of what to expect from him for the rest of the match.

This of course lead to Bournemouth being completely dejected from almost the beginning of the match and it gave Everton the opportunity to run wild for the entire first half.

Everton piled on the pressure and played their game how they wanted to, with nice passing and high pressing all over the pitch. It was clear that Bournemouth had been rattled early in the first half and Everton smelt blood.

It took the Blues 20 minutes to double their lead with James McCarthy, a man who looked to be on his way out in January, scoring a somewhat lucky goal in the box after some great work from Lukaku to get the assist. The game seemed almost over even at that early stage and with McCarthy now scoring his first goal of the season, it seems he’s been somewhat revitalized under Ronald Koeman. He looks set to be an important part of Everton’s midfield for the foreseeable future battling with Schneiderlin, Barry, Gueye, Davis and Besic for a place in the starting 11 every week.

Less than 10 minutes later Everton went 3-0 up with Lukaku doubling his tally. A terrible back-pass from Bournemouth’s captain gifted the ball to the Belgian and there was no chance for Boruc in goal. A truly dominant first half display had Everton fans disappointed that the half had to come to an end.

It was the second half where Everton’s display was not so dominant. From the off it seemed whatever Eddie Howe told his men at half time had been working. Bournemouth started the half with much more possession and started to create chances for themselves.

Bournemouth switched their system and went with a flat back four with two former Liverpool players coming on, one who’s career highlight was hitting the post against Everton, hardly a player worth the fee Bournemouth paid.

It only took Bournemouth around 15 minutes for their work to pay off with a goal from Josh King giving them some little bit of hope. Surely it was too little too late for them. Surely Everton couldn’t let them back in the game? However most fans will remember the heartbreak that Everton had gone through last season with the 3-3 draw that for many signaled the end of the Martinez-era.

This repeat heartbreak was made an even bigger possibility 10 minutes later with King striking again. The momentum was clearly in Bournemouth’s favor and everyone in the ground knew it. Perhaps Everton of yesteryear would’ve folded and fallen to the draw but not under Ronald Koeman.

Keeper Joel Robles kept Everton in it with some fantastic saves. However 10 minutes before the the end, Romelu Lukaku bagged his hattrick. He quickly followed it up with his fourth of the game with to become the Premier League’s top scorer of the season, as well as Everton’s 2nd all time Premier League scorer. Quite an achievement considering his ages.

However, the action wasn’t finished yet. Harry Arter scored a consolation goal for Bournemouth in injury time to make it 5-3  bedits Ross Barkley finished off the 9 goal thriller with a deserved goal for his performance. The England International took it around Boruc, and began celebrating even before the ball was in the net. It was an image that fans will not forget for some time.

Everton’s fight for the European places continue with this great win putting them only 2 points behind Manchester United in 6th and 6 points off Liverpool in 4th.

I feel it is clear to see that Everton could become one of the outsiders that could secure a Europa League spot and even if they can continue a level of consistency try for the Champions League spot that evaded them for so long.