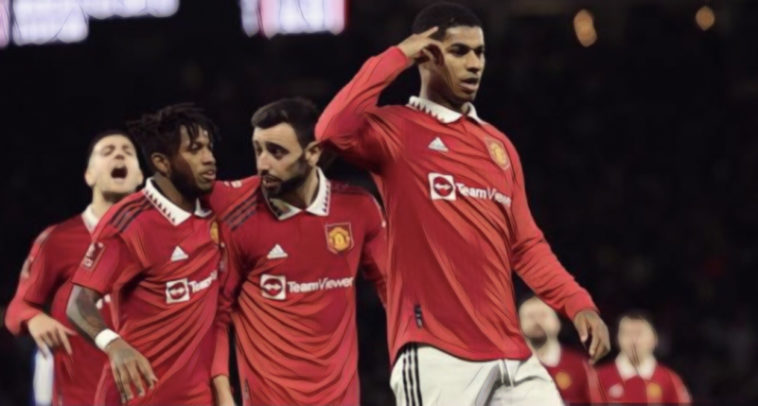 Manchester United will be in the hat for the FA Cup fourth round after the Red Devils ran out 3-1 winners over Everton tonight at Old Trafford.

Erik Ten Hag’s in-form side got off to the perfect start after just three minutes when the electric Marcus Rashford skinned Ben Godfrey down the left, before playing a perfect low cross to the back stick were fellow attacker Antony was left with the easy task of tapping home from close range.

Everton would hit back on 14 minutes though and it would come via a horrific error from Man United’s number one David de Gea. Neal Maupay’s near post shot somehow ended up squirming through the Spanish ‘keeper legs, allowing centre-back Conor Coady to fire home from a couple of yards out.

Five minutes into the second-half and Manchester United would retake the lead, with the brilliant Rashford once again the key man. The 25-year-old found himself on the byline after turning Seamus Coleman inside-and-out before his dangerous cut-back was inadvertently turned into his own goal by the unfortunate Coady.

15 minutes before the end Everton reminded the home side they were still in a game when substitute Dominic Calvert-Lewin bundled home from inside the six yard area, only to his see his effort chalked off by VAR for a marginal offside in the build-up.

Then in the depths of injury-time United finally killed the game off and who else would do the honours but the on-fire Rashford. Alejandro Garancho was brought down in the area by Ben Godfrey after a swift counter and Rashford stepped up to confidently fire a penalty past his international teammate Jordan Pickford.

Speaking afterwards match winner Rashford was happy to go through to the next round and admitted he’s really enjoying his football right now.

“It’s always nice to go through in cup games and the FA Cup is definitely a special one to play in. We’re pleased to go through to the next round and more importantly we keep momentum going and winning games,” Rashford told ITV Sport.

“In terms of performances, it’s probably the best that I’ve been so I feel good on the pitch, I’m getting into positions and areas to score goals. If I keep creating chances, I feel like I’ll keep scoring.”

The academy graduate went on to reveal how him and his teammates are targeting silverware this season.

“That’s the aim, that’s why we do what we do and why we work so hard,” Rashford continued. ”We want to be in finals and the biggest games. Ultimately, we want to be win silverware and a trophy. Hopefully this season we get a chance to do that.”