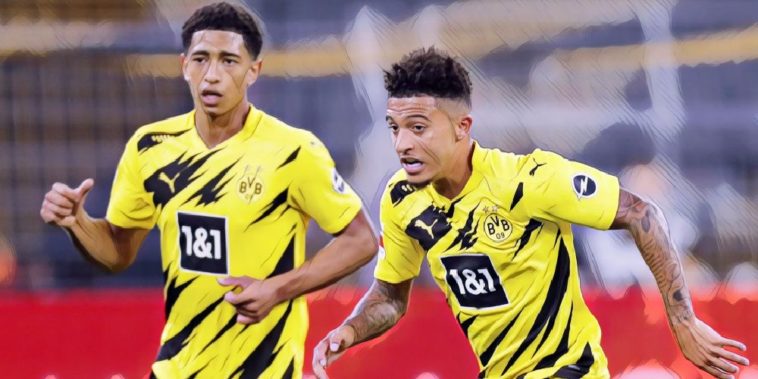 Borussia Dortmund are reportedly willing to allow previous Manchester United target Jadon Sancho to depart this summer, although the Red Devils are said to instead be ‘focussing’ on teammate Jude Bellingham.

The previous summer transfer window saw United involved in public and protracted negotiations with the German club over a deal for Sancho, the move ultimately breaking down after a long-drawn-out saga, following the Premier League side’s unwillingness to meet the £108m asking price for the player.

Those failed negotiations appeared to impact the former Manchester City man at the start of the campaign as he struggled to really get going, although he looks to be back to his best of late, after having netted twice in a crucial 3-2 win over RB Leipzig on Saturday.

With the 21-year-old now in strong form and potentially available for a cheaper price this summer, a move to Old Trafford, in theory, could again be on the cards, although it would seem that the Red Devils now have their eyes fixed elsewhere.

As per journalist Christian Falk, United have turned their attention to Sancho’s Dortmund and England teammate Bellingham, the 17-year-old having really caught the eye with his superb displays in the Champions League this season, most notably against Manchester City.

“At United at the moment, there is nothing at all on the Sancho interest; on the contrary, a move is not likely. The reason? Jude Bellingham,” Falk told BILD. “Dortmund themselves have the replacement for Sancho and would therefore sell Sancho.

It's the Jadon Sancho Show 🤩💫

The back flick, the cutback, and the finish 🤝

“The English are now simply focussing on Bellingham instead.”

United were reported to have been one of the sides desperate to sign the versatile teenager from Birmingham City last year, before he opted instead to move to the Bundesliga, where he has since played a starring role in a somewhat difficult campaign for the club.

As for Sancho, Dortmund CEO Michael Zorc has previously suggested that the club have a gentleman’s agreement to allow him to leave, although amid the current financial plight impacting most of Europe’s elite, it remains to be seen where his future lies.

Following the victory over Julian Nagelsmann’s side – a result that bolstered the club’s Champions League hopes – Sancho admitted he was unsure about his future at the Westfalenstadion.

“I don’t know about my future,” Sancho told ESPN.

“I am very happy here in Dortmund at the moment. I love the club, the fans and the team.

“They gave me my first professional start. The fans motivate and push me to the limit.”

Kane to ask Spurs to ‘listen to offers’ this summer