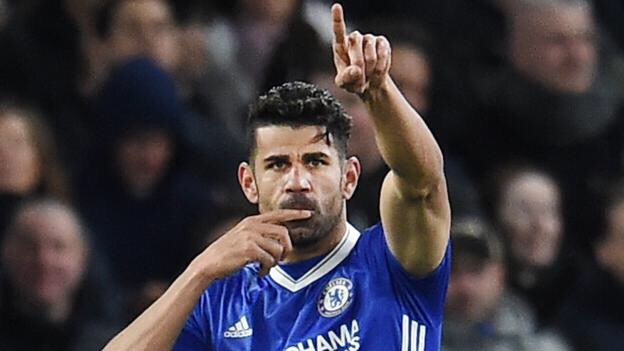 Diego Costa has given an update on his Chelsea future after speculation he will be heading to China this summer.

The 28-year-old striker claims that he will reject a move to the Chinese Super League, and claims he will only move back to former club Atletico Madrid if he leaves Stamford Bridge this summer.

The Spanish striker has been linked with making a big money move to the Far East, ever since an apparent failed move in January. After that supposed move fell through, the striker suffered a dip in form before finally finding the back of the net to Fire Chelsea towards their second Premier League title in three years.

Despite having a wonderful season, Chelsea missed out on the opportunity to seal the double after a 2-1 defeat to Arsenal at Wembley in Saturday’s FA Cup final.

Speaking after the game about his future at the club, Costa said:

“I don’t have any intention of going [to China],”

“The truth is I am very good here and I have a contract, but if the club want to sell me they know there is only one club I would go to. People talk too much about China and all that.

“I will stay if the club and manager want me. If they want to sell to bring in another forward, there’s no problem, I will go. The whole world knows that Atletico is the only club I would go to. If the club really want to sell me and an offer comes from another team, I stay, but if it’s Atletico I go.

“I haven’t spoken with Atleti. I am very relaxed… China? No. People talk too much about that.

“There is a World Cup this year, and I want to play in it, and if I go to China that won’t be possible.”

Chelsea have been linked with a move for Romelu Lukaku, while also being interested in Torino striker Andrea Belotti. Costa could replace Antoine Griezmann at Atletico, who has been heavily linked with a move to Manchester United.