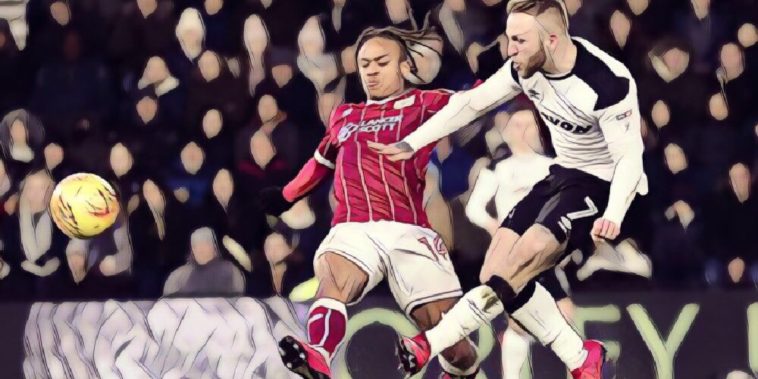 Two of the teams chasing promotion met in what looked to be a mouth watering clash last night as Derby County hosted Bristol City under the lights at Pride Park.

However, the game was slow to get going and saw a pretty scrappy opening thirty minutes. Jamie Paterson flashed a great chance over the bar for the visitors, while Curtis Davies’ header was cleared off the goal line by Robins defender Aden Flint.

Johnny Russell lashed a free kick against the bar just a few minutes after Matej Vydra had come close from a similar range. Bristol City ‘keeper and former Derby man Frank Fielding was the busier of the two shot stoppers, but his evening was cut short when he was forced off injured at half time.

Fielding’s replacement, Luke Steele was soon called into action. Keeping out Rams top scorer Matej Vydra as well as Welsh international Tom Lawrence. The Robins had a couple chances of their own, Famara Diedhou and Bobby Reid both shot wide of the goal as Bristol City never really gave Scott Carson too much to do.

The game’s biggest talking point was perhaps Derby’s penalty shout. Debutant Cameron Jerome was brought down in the box by Aden Flint, but his theatrical fall to the floor meant the referee booked him for diving – despite the contact.

The draw means Derby remain second in the league, whilst Bristol City could slip down to fifth if results go against them this weekend. Both sides are out of the FA Cup, so Lee Johnson’s men are back in league action next weekend with a home tie against QPR. Derby’s next game is on Tuesday 30th January, they visit The Den for an away tie at Millwall.