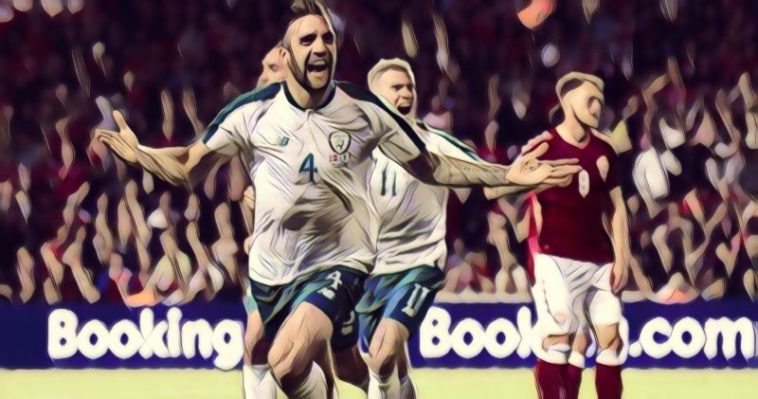 Ireland secured a massive point in their quest for Euro 2020 qualification after drawing 1-1 with Denmark tonight in Copenhagen.

Mick McCarthy’s side were hugely impressive at times, pressing high and showing real composure in possession during certain periods of the game. However, Denmark would eventually gain control during the second half and few could argue that the home side deserved their lead when Pierre-Emile Hojbjerg’s glanced header found the back of the net with 15 minutes left to play.

Ireland refused to accept defeat though, and with just five minutes left on the clock man mountain Shane Duffy rose highest to meet an Alan Judge free-kick and power home a header to earn his side a crucial draw.

The Boys in Green now go into Monday’s home game against Gibraltar knowing a win will see them stay five points clear of the Danes and six clear of Switzerland in Group D, although their rivals do have games in hand.

Anyway, no more messing around, let’s see how the players rated…

Made his now customary crucial save from Poulsen in the second period, and had no chance for Hojbjerg’s strike.

Solid in defence and contributed well in attack. Has started to look like his old self in recent months at club level and that’s a massive positive for Ireland – unless your name is Matt Doherty.

This is what happens when the lad running social media is six pints deep! ???#DENIRL pic.twitter.com/392Li7kZaO

Matthijs de Ligt wears Shane Duffy pyjamas – pass it on. Headed, blocked and tackled everything that came near him before winning his side a massive point with a towering header five minutes from time.

Defended valiantly and his distribution out from the back was impressive at times.

A superb switch of play on the volley when under pressure was a real highlight. Was given a taste of what life in the Premier League will be like up against the dangerous Poulson, but stuck to his task well.

A real mixed back for the Burnley man. A delightful touch in the first half and an excellent whipped cross in the second aside, the Dubliner looked understandably rusty.

Lacked a bit of quality in the final third on a few occasions, but his work-rate was superb, never gave the Danes a second on the ball.

Did a good job on Eriksen in the opening exchanges and while it now be in vogue to praise Whelo, the Danes found way too much space in between the lines during the second period. That’s not to say he was poor by any stretch, Denmark do have some classy operators in their ranks.

Set piece delivery was on point once again. Another who’s work-rate was immense and probably made up for a lack of quality on the ball at times.

Typically industrious performance by the Derry man. He’s a player with obvious limits, but covers a huge amount of ground down the left flank, and could have nicked it at the death from a tight angle had he been able to lift it over Schmeichel.

Made a real nuisance of himself up against two good centre-backs in Kjaer and Christensen, held the ball up well at times and ran the channels tirelessly always giving his teammates an out ball.

Came off the bench to win a free kick and then put in a classy ball for Duffy to power home the vital equaliser. Sadly it looks like the Dubliner broke his arm in the closing exchanges, which was the only negative to come out of the trip to Copenhagen. Hopefully, he heals quickly and is ready to go next season.

Put himself about after coming on with eight minutes left.

Who cares we need to get out so we don’t miss last orders!

Mick McCarthy is proud of his side's effort against Denmark, but it looks like Alan Judge has suffered a broken arm. #rtesoccer pic.twitter.com/RoUVvpMCzM